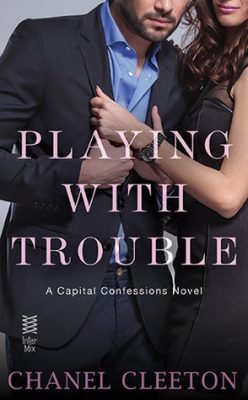 The daughter of one of the Senate's most powerful figures, Blair Reynolds was ready to become the ultimate political wife—until she caught her fiancé cheating on her wedding day. Law school is a fresh start, her shot at putting the pieces of her life back together. That’s the plan, at least. Until trouble comes in the form of her Torts professor, the man whose arrogance infuriates her in class but haunts her private fantasies.

Graydon Canter had a fortune and a place on all the hottest "Thirty under Thirty” lists, until a series of personal missteps nearly destroyed his career. A year teaching at a D.C. law school is just the break he needs to get his life back in order, as long as nothing—and no one—trips him up.

When Blair and Gray are forced to work together, their explosive attraction becomes impossible to resist. But Gray’s demons have drawn him dangerously close to the edge, and Blair has spent her life playing by the rules. Will she break them for a shot at love?

Chanel Cleeton’s Capital Confessions series is definitely near the top of my list of favorite adult contemporaries this year. I absolutely loved Flirting with Scandal when I read it a couple months ago. I’ve been saying for awhile that I need more books set in Washington, DC – in genres I enjoy reading – and Chanel has delivered BIG TIME with this series.

When Blair first appeared in Flirting with Scandal, I wasn’t sure what to think of her. I knew she wasn’t competition for Will’s affection as far as Jackie was concerned, but I was still lukewarm to her. Of course, it wasn’t long before I ended up really liking her character and really enjoying watching her step into her role as big sister for Jackie. I knew I wanted/needed her book. I couldn’t wait to see her get a real chance at love after the drama of what was supposed to be her wedding day. The poor lady had been through a lot. I wanted to see her happy.

Oh, Graydon. You started out as such a grumpy, nasty guy. Underneath it all, however? There’s a pretty great man. (And one with a seriously dirty mouth. Rawr.) I wasn’t sure he could ever be the guy to make her happy – or, more importantly, that he would allow himself to be that person. He had a troubled past and had made his share of mistakes, but that really only endeared him further to me. He’d pulled himself out of that life and had obviously become a better man.

I really liked Blair and Graydon together. They had TONS of chemistry and the sexual tension was such that it could’ve been cut with a knife. I’m a sucker for a good forbidden romance and I’ve always enjoyed the student/teacher relationship dynamic. (Um, when it happens between consenting adults, naturally.) I liked how they pushed each other – her to make him realize that his past doesn’t define his future and him to make her see she doesn’t need to play the part of the “perfect” … everything … and that the real Blair is pretty damn amazing. There was maybe just a little more back and forth between them than I would’ve liked, but I understood why it was that way. Between the forbidden nature of their relationship and the issues from each of their pasts it made sense. I just wanted to see them happy together sooner rather than later. 🙂

Playing with Trouble was a fantastic addition to the Capital Confessions series. I love the setting and the characters and how everything is building towards what is going to be an incredible conclusion. I’ve loved watching the characters come together, whether it be romance, friendship or family ties. Each of the first two books have sucked me in and not let me go until long after I finished them. They’re sweet and sexy with characters I can’t get enough of. And, just to add something a little MORE, there’s an underlying bit of mystery and drama with the girls and their relationship to their father – and the things he’s involved in. So flipping good.

Fans of this series, beware. There is a teaser for Falling for Danger at the end of the book. It is BRUTAL and amazing and I was damn near in tears from reading just that little bit. I’m sad to see this series come to an end, but OH MY GOD I NEED THAT BOOK. It was already atop the list of my most-anticipated books of fall, but now it’s pretty much smack dab in the top position. Something tells me the final book with be full of feels. I can’t wait.