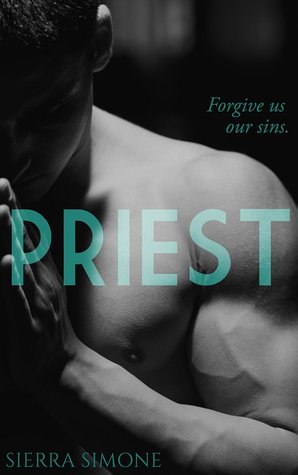 I've always been good at following rules.
Until she came.
My name is Tyler Anselm Bell. I'm twenty-nine years old. Six months ago, I broke my vow of celibacy on the altar of my own church, and God help me, I would do it again.
I am a priest and this is my confession.

I will preface this review by saying that this book IS NOT FOR EVERYONE. I can’t stress that enough. I’m not a super religious person. I am not Catholic. But this book pushed me FAR from my own comfort zone at times. I won’t deny that I totally cringed during some scenes because I thought it might’ve gone just too far. But the story. The pain. The conflict. It sucked me in and wouldn’t let me go. No words can truly do this book justice, but at the same time I feel compelled to put my thoughts out there.

Priest is told mostly from Father Bell’s perspective. I wouldn’t have it any other way. He’s the star of this book. Sierra does an AMAZING job with his voice. I felt it all. It was angsty and, at times, painful. But holy hell. Priest Bell was a man torn between religion and passion. His calling and a woman who came into his life. He knows the feelings he has for her are not ok, but at the same time, he can’t imagine that they are wrong. While there’s no doubt this book is a love story, it’s also so much more than that. If I’m being totally honest, I loved his journey more than I did the romance.

While I loved Father Bell, Poppy wasn’t as easy of a sell for me. She was undoubtedly a woman who owned her sexuality and when after what she wanted. I can’t fault her for that. Hell, I applaud her for it. I just felt like it took a long time to get to where I felt like I understood her character and her motivations. And, at the risk of spoilers, I seriously found myself hating her at one point late in the book. I even conceded that I didn’t care if they wound up together because I wasn’t entirely sure she could win me over again. Believe me, that says a lot because I always root for romance in books.

Priest was taboo. That’s a word that gets thrown around a lot in describing books, but believe me when I say it’s accurate here. I won’t get spoilery and give you specifics, but some of the things that are brought into play with Tyler and Poppy made my eyes pop out of my head and my jaw hit the floor. There was a lot of frantic texting of my friend who finished it right before me. It was texting of the “Oh no he’s not going to… oh but he did” variety. It was shocking and sacrilegious and absolutely addicting. I couldn’t get enough of this story. It was one of the hottest, dirtiest books I’ve ever read… and that says a lot.

Before reading this book, I saw a lot of people talking about how hot it was. I love good, dirty sex as much as the next woman, but I need a little more to make me love a book. While I undoubtedly got the dirty sexy times with this book, I got so much more than that. I loved the sexy times, even as much as they shocked me. But when I reflect back on the book, it’s Tyler’s journey that stands out to me the most. I was hopelessly in love with him and wanted him to reconcile his feelings and find happiness. I’m not sure the last time I read a book where the male’s inner dialogue was as incredible as his was, but my god, I felt every emotion. I was with him 1000% on this journey as he tried to figure out what path his life should take going forward. While I’m not a very religious person, I found his reflections on religion so accurate and timely given a lot of things happening in the real world. It wasn’t preachy, but it definitely made me think.

I’ve found that sometimes the most hyped books fall flat for me. Not this time. Priest was everything I wanted and more. It was so close to total perfection that I seriously didn’t know what to do with myself for days afterwards. Even now, just thinking about it again, I want to devour it a second time. It’s undoubtedly one of my favorite books of the year so far. I suspect it might make the year-end list as well.

5 responses to “In Review: Priest (Priest #1) by Sierra Simone”