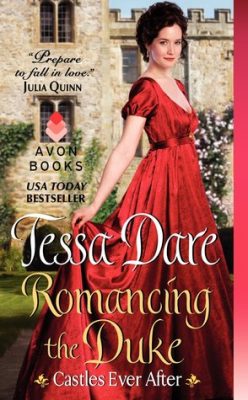 Romancing the Duke by Tessa Dare
Series: Castles Ever After #1
Genres: Historical Romance
Publication date: January 28, 2014
Publisher: Avon Books
Format: eBook, 380 pages
How I got it: I bought it!
Add it: Goodreads
Buy it: Amazon | Barnes & Noble
My rating:

As the daughter of a famed author, Isolde Ophelia Goodnight grew up on tales of brave knights and fair maidens. She never doubted romance would be in her future, too. The storybooks offered endless possibilities.

And as she grew older, Izzy crossed them off. One by one by one.

Now Izzy’s given up yearning for romance. She’ll settle for a roof over her head. What fairy tales are left over for an impoverished twenty-six year-old woman who’s never even been kissed?

I picked up this book on a whim, after downloading an ARC of a later book in the series… also on a whim. Believe it or not, it’s my first ever historical romance. (Unless, of course, you’re counting those times when I used to peek between the pages of whatever bodice ripper my mom was reading when I was younger. I don’t.) I really didn’t think historical romance could live up to the sexiness and swoon of contemporary, but I was so, so very wrong.

I fell in love with this book. The story, the characters, the setting. It was all magical and fairytale-like. I just loved Izzy. She was such a great, strong character. I clicked with her immediately. Her lack of self-confidence was easy to relate with. I liked watching her trying to balance the young, innocent girl the entire country knew with the grown up woman who desired love and passion. I loved how she grew and become more confident as the story continued. And the full revelations that came to light? YES! If I’m honest, I didn’t see that coming at all.

Ransom wasn’t the swooniest guy in the beginning, but my goodness, I was crushing hard before the end of the book. Poor guy had been through a lot – and didn’t deserve to be dealing with the shady folks he was. I’m a sucker for a good antagonistic romance, so naturally I loved how things began between Izzy and Ransom started off. They had TONS of chemistry and I just liked them together.

Romancing the Duke was a fun book. It was also swoony and romantic. I laughed and blushed and really just enjoyed the entire ride. It was nice to get lost in something different than what I normally read. I enjoyed the characters (including some of the secondary characters who I hope get their own book *cough* Abigail *cough*), the story and the setting. I couldn’t have picked a better first historical romance.

Consider me a historical romance convert! I honestly never thought they were for me, but clearly I was mistaken. I’m so glad I decided to dip my toe in the waters… now I think I’m just about ready to dive straight on in. My Kindle is loaded up and ready to go.

Tessa Dare is the New York Times and USA Today bestselling author of twelve historical romance novels and four novellas. Her books have won numerous accolades, including Romance Writers of America’s prestigious RITA® award and multiple RT Book Reviews Reviewer’s Choice Awards. Booklist magazine named her one of the “new stars of historical romance," and her books have been contracted for translation in a dozen languages.

A librarian by training and a booklover at heart, Tessa makes her home in Southern California, where she lives with her husband, their two children, and a pair of cosmic kitties.

Tags: 4 Star Review, Castles Ever After, In Review, Romancing the Duke, Tessa Dare