Welcome to my stop on the blog tour for Tessa Bailey’s latest, Up in Smoke! This was a fantastic read and a great addition to her Crossing the Line series. Learn more, read my review (and a steamy excerpt) and enter the tour wide giveaway below! 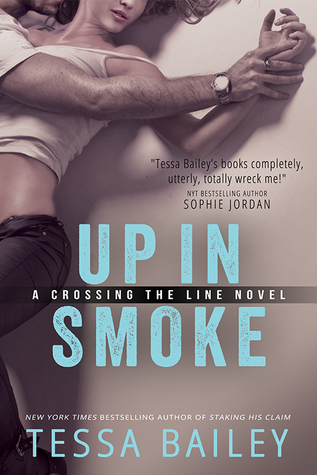 Up in Smoke by Tessa Bailey
Series: Crossing the Line #2
Genres: Adult, Contemporary, Romance
Publication date: June 23, 2015
Publisher: Entangled Select
Format: eARC, 352 pages
How I got it: From the publisher
Add it: Goodreads
Buy it: Amazon | Barnes & Noble
My rating:

Connor Bannon is supposed to be dead. Dishonorably discharged from the Navy SEALs, he's spent the last two years working as a street enforcer in Brooklyn for his cousin's crime ring. Through a twist of fate, he's now in Chicago, working undercover to bust criminals. But when a cute little arsonist joins the team—all combat boots, tiny jean shorts, and hot-pink hair—Connor’s notorious iron control slips.

Erin "she's getting away" O'Dea knows two things. She hates authority. And… Nope, that's it. When she's forced to operate on the “right” side of the law, her fear of being confined and controlled blazes to the surface. The last thing she expects is a control freak like Connor to soothe her when she needs it most. Worse, something behind the sexy ex-soldier's eyes ignites a dangerous inferno of desire. One that invites Erin to play with fire. And one that could get them both killed…

I’m an unapologetic Tessa Bailey fangirl and I love everything she writes. There’s really no other way to put it. There’s something special about the Crossing the Line series. I love these reformed (and even maybe even NOT so reformed) “bad” guys with hearts of gold. Bowen slayed me in Risking it All. Connor did the same in this book.

Up in Smoke wastes absolutely no time getting down to business. There’s no big lead up into the story and I was all for it. Connor and Erin had undeniable chemistry from their very first meeting. I thought my iPad was going to go up in smoke, as a matter of fact. (See what I did there? Ha!)

I was already a Connor fan from reading Risking it All. I never got the sketchy guy vibe from him. To me, he was just a guy who got wrapped up in the wrong things and absolutely with the wrong people. I loved seeing his redemption here. Erin was an enigma, but one that I grew to like pretty quickly. She was a great, strong heroine with a really crappy past. Together these two were golden. The bossy alpha paired up with a woman who doesn’t like to be touched? Their pairing was unlikely as hell but my god did it work. And bonus points for Connor being man enough to submit to Erin and her desires to touch HIM while not allowing him to touch her. *fans self* The heat these two were throwing around was unreal. But, it was more than just steam. There were some very real feelings between them and I really enjoyed watching them work their way towards each other and admit those feelings.

Side note: big, brawny alpha Connor definitely has a heart of gold. There was a beautifully heartmelty scene with them in a certain Chicago landmark that actually brings tears to my eyes when I think about it. He was *always* putting her needs first and concerned about protecting her, while giving her the freedom she needed to not feel suffocated. That’s why their pairing worked so well. They were both willing to bend to the other and TRUST each other.

Up in Smoke was a great addition to the Crossing the Line series. The character development was top notch. Connor and Erin fit in nicely with Bowen, Sera and Derek. (Which, by the way, OMG HAPPY BOWEN AND SERA TIMES. I cried.) And Derek? Derek is still as awesome as I always thought he was. So yes, we get a great glimpse into their lives during Connor and Erin’s story. I loved it. I also enjoyed the action and suspense in this book. Another great Tessa book!

The preview for Austin’s book, Disguised in Danger, had me gasping aloud and wishing it was January already. Oh, how I need this book in my life. I can’t wait!

As if her thoughts had made him appear, Connor strode into the courthouse. Her pulse started beating double time, her stomach muscles tightening. Good Lord, the man was a fucking panty dropper. She’d only been away from him for a few hours and it felt like years since she’d experienced his presence. In jeans and a fitted gray T-shirt that molded to his muscles like her hands itched to do, he personified confidence and authority. Hot, rugged male. His gaze connected with hers immediately and darkened. She thought back to that morning when he’d dressed in the early morning light, his abs flexing as he pulled the shirt over his head. His erection barely contained by his boxers. She’d never been one to beg for anything, but she’d been seconds from offering him her mouth. Pleading for the privilege of sucking him off.

Conner shook his head at her with a sexy half smile on his face, as if he could read her thoughts across the room. He stopped at the metal detector and walked through after the security guard beckoned him forward. When the woman grabbed her wand and instructed him to raise his hands in the air, something ugly reared its head deep inside her. The detector hadn’t even beeped. There was no reason for the personal service. When the woman smiled at Connor and ran a hand down her ponytail, Erin propelled herself forward, boots echoing on the polished marble.

Erin hissed as she drew even with the guard. “If you’re done feeling up my boyfriend, I’d love a turn. We were in a rush this morning.”

The guard dropped the wand, letting it dangle near her thigh. “Did you just hiss at me?”

“Okay.” Connor stepped between them, winking down at her. “We should go. Don’t want to keep the clerk waiting.”

Appreciation spread in her belly like honey. He hadn’t chided her for her behavior or apologized to the woman on her behalf. Instead he’d given the impression they were on their way to get married, appeasing her jealousy in one fell swoop. “That’s right.” She sauntered toward the elevator. “There’s vows to be exchanged. Rings to put on fingers. Shit like that.”

She glanced behind her to find Connor staring at her ass as she walked, so she put a little swing in her hips and savored his groan. Damn. She’d definitely never had this much fun at a courthouse.

A moment later, she and Connor stepped into an empty elevator. She hit the button for the top floor even though the clerk was on the first, and leaned back against the wall, looking up at him through her eyelashes. “How was your morning, baby? Was it worth leaving me in bed, all hot and bothered for you?”

Risking it All (Crossing the Line #1)