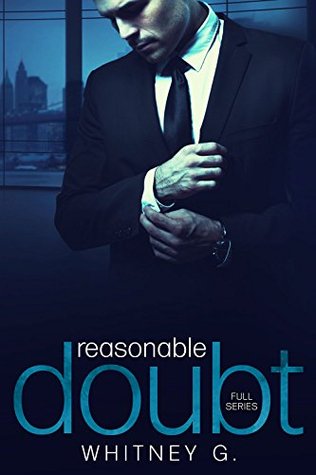 My cock has an appetite.

A huge and very particular appetite: Blonde, curvy, and preferably not a fucking liar...(Although, that's a story for another day.) As a high profile lawyer, I don't have time to waste on relationships, so I fulfill my needs by anonymously chatting and sleeping with women I meet online.

My rules are simple: One dinner. One night. No repeats.

This is only casual sex. Nothing more. Nothing less.

But then she came into my firm for an interview--a college-intern interview, and everything fucking changed...

I’d seen the Reasonable Doubt serial around for quite awhile before I decided it looked like something I was really interested in reading. Since I have a love/hate relationship with serials, I decided to hold off until the entire thing was available – and then I forgot about it until someone gifted me a copy of the box set a couple months ago. I don’t read a lot of office romances, but I was in the mood for just that the other day. This book definitely scratched my itch.

I’m reviewing this one as a whole, instead of in three parts, because that’s how I read it. Let me tell you, I’m glad I did, too. The cliffhangers at the end of the first and second parts of this series were BRUTAL and I think I would’ve set my iPad on fire (or at the very least tossed it down in exasperation) if I’d been reading this as it was published. That is the beauty of a serial though, I suppose. It sucks you in, gets you addicted and then leaves you gasping for more at the end of the individual parts. And boy, did this one suck me in.

Reasonable Doubt was just a damn good story. I enjoyed the characters. I wanted to smack them. I wanted to hug them. I bounced around all over the place while reading this story. Even when I wanted to smack them, it was only because they weren’t making the decisions I wanted them to. It was impossible not to be invested in their story. Their relationship was antagonistic as hell, forbidden and freaking addictive. The sex was so hot I swear flames were shooting out of my iPad. I also enjoyed how both Andrew and Aubrey grew over the course of this book. They were both keeping secrets and that made for some twists I never saw coming. It’s strange to say I enjoyed the duplicity in this book, but damned if that’s not the truth. Their whole friendship – and everything that developed from it – started on a lie, but that didn’t make it any less real when it was all said and done.

I really enjoyed pretty much everything about this book. I set out planning to read a few chapters and then go to bed, but ended up devouring the entire book, er series, in one evening’s time. It was hot as hell, twisty and turny, a little angsty and a bit sweet. I hung on every word.

A self diagnosed candy addict, travel junkie, and hypochondriac, Whitney Gracia Williams LOVES to write about characters that make you laugh, cry, and want to (in the case of Selena Ross) reach through your Kindle and slap them.