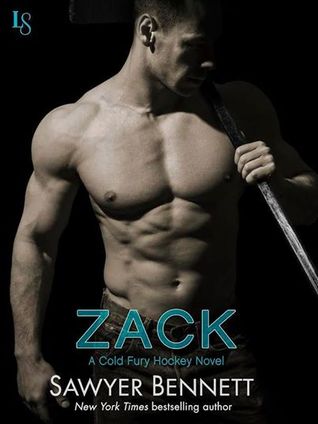 Rising star Zack Grantham has been stuck in a downward spiral of grief ever since the car accident that left him a single dad and put his career on hold. Back on the road with the Carolina Cold Fury and still crippled by emotional baggage, he’s in need of some serious help with his son. But while the nerdy new nanny wins his son’s heart, Zack isn’t sure he’s ready for a woman’s touch—even after getting a glimpse of the killer curves she’s hiding under those baggy clothes.

Kate Francis usually keeps men like Zack at a distance. Though his athlete’s body is honed to perfection, he refuses to move on with his life—and besides, he’s her boss. Still, the sparks between them are undeniable, tempting Kate to turn their professional relationship into a personal one. But before she makes a power play for Zack’s wounded heart, Kate will have to open him up again and show him that love is worth the fight.

I’ve been waiting anxiously to see what would happen to Zack after the accident that took his girlfriend and the mother of his child away from him in Garrett. I figured this would be an emotional read and it was, but not exactly for the reasons I thought.

If I’m being totally honest, Zack was NOT the nicest guy on the planet in the beginning of this book. I expected to go into it swooning all over the place and wanting to hug him to make him feel better. Instead I found myself cringing at the way he behaved at times. But I got it. I know why he was how he was. He was struggling. His guilt and grief were overwhelming, yet he had to pull it together to be a good dad. Part of being a good dad meant recognizing he couldn’t do it alone. Enter Kate.

Holy cow, did I love Kate. She was nerdy and goofy and so freaking charming. She was a wonderful nanny to Ben and a huge help to Zack. Her relationship with Zack was complicated from the very start. He wanted her to look after his son, but on his terms. He was feeling powerless and he didn’t want Kate to replace Gina, but Ben needed some motherly influence. Kate did a great job balancing Ben’s needs and Zack’s quirks. Add to that the burgeoning attraction between Kate and Zack and the story got that much more interesting.

I can’t truthfully say I really loved Kate and Zack together. Not at first, anyhow. Everything about them was too complicated to say that. I did, however, love what they brought out in each other and I eventually came to truly appreciate them together and root for them. Zack helped Kate become more self-assured and confident. Kate made Zack realize he wasn’t to blame for the accident that killed Gina and that he did deserve happiness.

My heart ached for both of the characters throughout this book – and for Ben, as well. I could feel the emotions in every scene. Zack wasn’t transparent to the other characters in the book, but because of the time I spent in his head during this, I felt like I understood him further. The loss he went through and everything he dealt with as a result was heartbreaking. But, on the other side of things, I related VERY well to Kate and I wanted her to be happy, too. I definitely know what it’s like to compromise and accept what a man is willing to give without pushing for what you really want, just so you can have him in your life on his terms. So, yeah, I was pretty much a ball of emotions during this book.

Zack was a perfect addition to this series. Each of the guys in Sawyer’s Cold Fury Hockey series have a special place in my heart, but there’s just something so much MORE to Zack. His story wasn’t always pretty, but it was raw and real and it tugged at my heartstrings. A lot. I’m intrigued with the introduction of Ryker and can’t wait to see more of this single dad in his book.