Welcome to my stop on the blog tour for Caisey Quinn’s Loving Dallas! I am LOVING this Neon Dreams series, so I’m thrilled to be participating in the tour. Check out my review, an excerpt and the giveaway below! Thanks for stopping by! 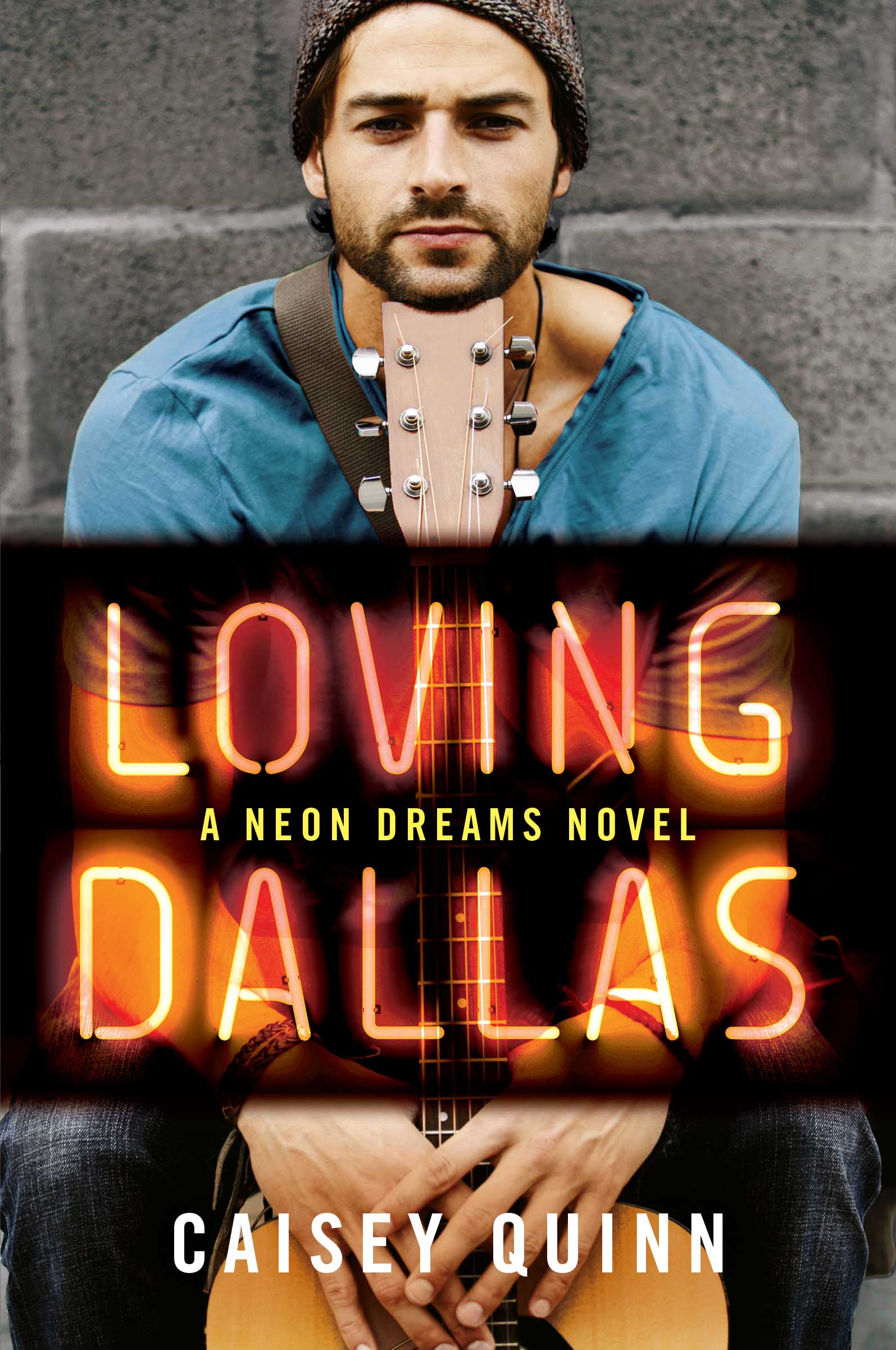 In the second novel in bestselling author Caisey Quinn’s Neon Dreams series, a country rock band and its members embark on the rocky road to fame and find love along the way.

Dallas Lark is so close to achieving his dream of making it big in country music that he can taste it. Arriving in Nashville after signing with sexy, successful manager Mandy Lantram, his life goes from tragedy and turmoil to one lucky break after another—except it isn’t really luck because Dallas has sacrificed everything for his career, leaving behind his band, sister, best friend, and high school sweetheart, Robyn, in the pursuit of fame.

Robyn Breeland is a successful marketing coordinator and promotions specialist for a thriving liquor distributor out of Texas. She loves every aspect of her job: coming up with new ideas, traveling, hosting promotional parties and exclusive events—until it brings her face-to-face with the man who broke her heart, prompting her to erect a steel cage around it.

When their paths collide and they’re forced to work together, Dallas and Robyn realize that the old spark they thought they’d extinguished might still be a burning flame.

I’ve been waiting (impatiently) on the second book in Caisey Quinn’s Neon Dreams series since I devoured Leaving Amarillo a few months ago. I wanted to drop everything and read Loving Dallas the minute I received the ARC, but they say good things come to those who wait, so I held off until a little closer to release. (Which was hard, y’all.) I loved it nearly as much as the first.

If I’m being totally honest with myself (and you, by extension) I have to admit that I DID NOT love Dallas in Leaving Amarillo. I was totally connected to his sister, Dixie, and his actions hurt her. I did not approve. (Ok, ok, I know… he didn’t have the full story. But he was still far too quick to dismiss the people who helped get him where he was going for my liking.) I wasn’t too far into this book before I was totally singing his praises though. Maybe it was the second chance story. Maybe it was just that I loved him and Robyn together so much. Whatever it was, I fell in love with him here.

Robyn! I loved this girl. I liked her during her cameo in Leaving Amarillo, but I fell deep into girl crush mode with her during this book. She was smart and funny, driven and relatable. Even when things and stuff happened, she stood strong and kept her head up. The chemistry between her and Dallas was off-the-charts hot and I loved watching these two find their way back to each other. First loves leave a mark. And sometimes they’re even better the second time around.

Loving Dallas was a fantastic book. Naturally, I loved the characters and the second chance romance. The sexy times were HOTT – yes, with two Ts – and the love story was real. It ruined me in the best way possible, even handling storylines I typically shy away from with grace and an ease that made me totally ok with them. (And, actually, LIKE it. It totally worked here.) Because music and the industry is such an important part of this series – and has definitely shaped Dallas into who he is today – I have to say I like the spotlight Caisey puts it under. Now, I know nothing about the music industry so I don’t know how accurately its portrayed, but it certainly seems legit to an outsider like me.

I was happy to get a little bit of Dixie and Gavin in this book – separately, of course, because things ended in a rocky way for the two of them. I didn’t necessarily *like* what I saw, but was glad to get a couple more pieces of the puzzle. I NEED Gavin’s book so, so much now. I really don’t think I can wait until October. I do have a sneaky feeling Missing Dixie is going to absolutely ruin me though. It’s gonna hurt, but hopefully it’s all right in the end. Don’t let me down, Caisey! 😉 (Like she ever could/would.)

“Tell me what you’ve sacrificed. I want to know,” Dallas says evenly, completely unfazed by my obvious psychotic break. “Because I know a thing or two about sacrifice myself. But I can tell you this much, I would never sacrifice my dignity and I sure as hell didn’t get where I am on my back or by putting anyone else on theirs.”

“Mandy. She’s my manager. Our relationship is strictly professional, and it will stay that way, regardless of what her intentions may or may not be.”

“Okay.” I don’t want to feel relieved. I shouldn’t care. But my tightly wound nerves loosen a fraction.

“Your turn,” he informs me, folding his muscular arms over his broad chest.

“To tell me if you’re fucking Wade! If that’s how you got on this tour, I want you to end it. He’s a grade A piece of shit who doesn’t give a damn who he—”

Dallas doesn’t get to finish his sentence.

Because I slap him. Hard. So hard my hand is still stinging.

Our faces must be matching masks of shock and I see the replay in slow motion. I’ve never struck another human being in my entire life. And I just slapped the only man I’ve ever loved with everything I was worth.

“If you ever, ever, even think to insinuate that I got where I am on my back, I swear to God, Dallas Lark, I will make that seem like a love tap.”

I am so immensely infuriated that everything in my line of sight is tinged in red. But more than that, I’m hurt. Hurt that someone I once cared so much for, and still care about more than I’d like to admit, would think that of me. Stitched-up lacerations on my heart that were on their way to being pretty pink scars are opening wide and angry. He didn’t invite me here for pancakes to catch up or spend time with me or figure out how to work together or even attempt to make amends. Nope. He’s just jealous and arrogant and a raging asshole.

“I didn’t mean to insinuate that—”

“Get the hell away from me.” I whirl around and step right into a fresh puddle. Great. Wonderful.

“No,” Dallas says, pulling me toward him and catching me off guard. “I need you to hear me out.”

“What’s to hear? You’re an arrogant ass and I hate you.”

He gives me an infuriating smirk. “No you don’t. If that were true, you wouldn’t be this pissed.”

I struggle to find a reasonable argument to this so I say, “Fuck you, Dallas.”

“Yes, please. Come back to the hotel with me. The car service is already here.” I yank out of his grasp, causing a painful friction between our skin.

He pulls me to his chest and my anger is fading, too diluted by his scent and his intensity.

“I’m sorry, baby. I’m so damn sorry,” is all he says before kissing me brutally on the mouth. Mine pops open in shock when he pulls back to breathe. His gaze presses into mine as my mind tumbles over itself trying to process the abrupt turn of events. His thumb grazes my cheek gently. “I never meant to hurt you,” he says before devouring me again.

And Lord help me, I don’t even know which thing he’s apologizing for—the past or the present—because I’m melting. The rain, his fiery hot mouth, his hands scorching a trail over my body. I’m drowning in Dallas and I can’t stop.

Worse, I don’t even want to.