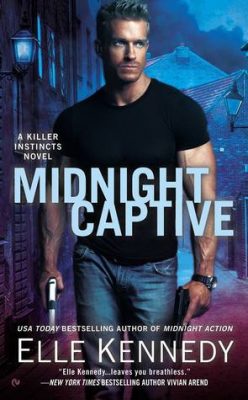 Former CIA agent Bailey Jones has spent months trying to forget her night of passion with mercenary Sean Reilly. An elite and methodical assassin, she has no room in her life for a reckless, rule-breaking Irishman, and she’s vowed to steer clear of the tempting bad boy who lured her into his bed under false pretenses.

When Sean is implicated in the robbery of a Dublin bank, Bailey knows something isn’t right. So what if she can’t trust him? There’s no way Sean would end up on the wrong side of the law. In fact, he’s stuck in the middle of a dark and dirty conspiracy that could put his twin brother’s life at risk with one wrong move. And Bailey’s life too when she agrees to help.

As the stakes are raised and Bailey finds herself torn between two brothers, the fine line between danger and desire is crossed…and it’ll take more than a killer instinct to survive.

You may or may not remember that time last month when I sat aside every other book I needed to read and review and binge-read Elle Kennedy’s Killer Instincts series. I do. Very well. It was the first time I realized just how much I LOVE romantic suspense when it’s well-written. And, my friends, Elle Kennedy writes FANTASTIC romantic suspense.

Midnight Captive is exactly the kind of fast-paced, edge of your seat action I’ve come to expect from Elle and the Killer Instincts series. I really liked the characters. Sean was Alpha and Irish and all kinds of hot. He was also in some serious trouble in this book. Bailey was feisty and fierce. When she stepped in to help save Sean, I cheered. I couldn’t wait to see these two together. And boy, I wasn’t AT ALL disappointed. They had loads of sexual chemistry and the banter between them was great. In a twist from the usual in romance, it’s Sean who goes after Bailey with all he has… and Bailey who isn’t looking for a relationship. I loved watching him slowly chip away at her walls.

There’s just so much good about this book (and the series as a whole). I find myself completely wrapped up not only in the main characters and the dynamic between them, but in the phenomenal secondary characters. (Who, I hope, one day, will all become main characters in their own book.) There are so many different types of relationships explored in this series and that, combined with the action, makes this series totally unputdownable to me.

Ok, I’m not going to tell you what happens in the epilogue of this book. I’m just going to say that I am STILL in full on freak out mode over the thought of what’s to happen to a character I’ve really grown to love during this series. (The author’s Twitter response about how I was going to hate her when I saw what he got himself into is also a HUGE cause for concern.) I’ve watched this character grow – and have flipping amazing sexual chemistry with another guy in this series – and I need a good resolution to his story. So yeah, as much as I’m anticipating the next book (and freaking out because it’s sooooooooo far away) I’m also really nervous to read it.

But you know what? That’s a sign of a damn good romantic suspense series.

I received a copy of this book from the publisher, via Netgalley, in exchange for an honest review.