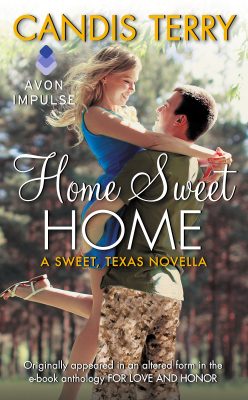 Before Candis Terry's wild Wilder brothers met their matches, a soldier gets a homecoming in Sweet, Texas

Army Ranger Lieutenant Aiden Marshall fought in some of the most hellish corners on earth and survived. Those closest to him, did not. When he returns home to Sweet, Texas, he believes he's broken and has lost everything—including his soul. The only fair thing he can do to the woman who's patiently waited for him to come home is tell her to move on with her life—without him.

… but she never will

Sassy waitress Paige Walker has no intention of walking away from the man of her dreams. He gave his all for his country and served with honor. Now it's time to pull him from the darkness and give him hope. With a heap of love, the help of the entire town, and a tail-wagging companion, Paige makes sure her hero knows there's no place like home sweet home.

Home Sweet Home was a short, but sweet addition to Candis Terry’s Sweet, Texas series. A novella about one of Sweet’s favorite couples – Paige and Aiden – it sucked me in from the start and made me wish it was even just a little longer.

This novella takes place immediately after Aiden returns from the Middle East. He’s not in a great place, after losing his two best friends and having to leave his other comrade, one of the four-legged variety, behind. He’s suffering PTSD and survivor’s guilt. He loves Paige, but is now convinced he’s not good enough for her and fears he and his problems will drag her down. Paige, on the other hand, is thrilled to have Aiden back and sure isn’t going to let him go without a fight. It was a short story, but it felt complete. (Even if I greedily want more.) It was full of feels – and rather sexy.

I loved Paige and Aiden both. My heart broke for him and the things he had to go through. (Of course, I still kinda wanted to smack him for trying to push Paige away. I got it, but it was frustrating.) Paige was a strong, determined and thoughtful woman. It’s not often the woman has a “grand gesture” in a book, but OMG, did she ever. It totally brought tears to my eyes.

Not only was Home Sweet Home a great romance, it was a good illustration of what makes small towns so special. I loved how the town rallied behind Paige to help thank Aiden for his sacrifice. It was really moving. A fantastic addition to the Sweet, Texas series, it could easily be read as a standalone as well. But, really, if you’re not reading this series, you’re missing out on some of my favorite contemporary romances. 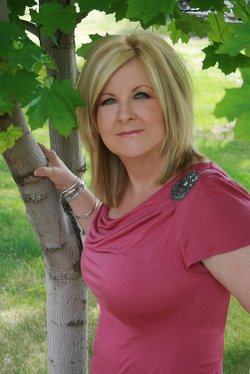 One response to “In Review: Home Sweet Home (Sweet, Texas #0.5) by Candis Terry”