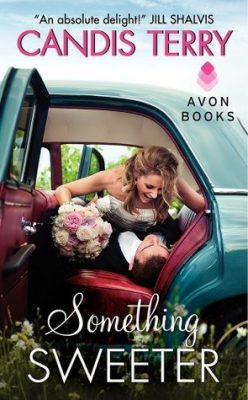 Seattle event planner Allison Lane is an expert at delivering the perfect wedding—even if she might not exactly believe in the whole "'til death do us part" thing. When her father decides to tie the knot with a woman he barely knows, Allison heads to Sweet, Texas, to make sure his new honey is the real deal. What she didn't expect to find at the local honky-tonk was a sexy Southern man as bent on charming her pants off as he is on blowing her "true love doesn't exist" theory all to hell.

Veterinarian, former Marine, and Sweet's favorite playboy Jesse Wilder takes one look at Allison and knows she's a handful of trouble he can't deny. But even after a sizzling kiss and obvious mutual attraction, it seems Allison has no such problem. When Jesse uncovers her sweet side, can he crush his playboy image, melt her cynical heart, and change her mind about taking a trip down the aisle?

Not only does Something Sweeter have my favorite cover of all the books in the Sweet, Texas series, I think the book itself is probably my favorite. You know, if you made me choose. (Please don’t make me choose.) From the romance to the revelations to the familial relationships, this book gave me all the warm fuzzies.

For the record, I freaking love Jesse Wilder. For three books now, I’ve been led to believe he’s little more than the town playboy who jumps from bed to bed with no interest in anything more than a fling. I was thrilled to find out that rumors of his sexual escapades were exaggerated and there is SO MUCH MORE to him underneath it all. He’s something truly special. I love how he looks out for his family and he cracked my heart open just a little bit with the ferocity with which he kept his now-deceased big brother’s secret. Family means everything to this guy and he’s quick to put the happiness of the ones he loves in front of his own.

Allison was a great heroine. If I’m honest, I didn’t love her at first but she definitely grew on me. She was a strong and successful business woman. Her father is getting ready to marry Jana Wilder and she’s struggling a bit with that. She was skeptical when it came to love and didn’t want to see her father hurt again. I loved the relationship between Allison and her father. I also loved how easily the residents of Sweet, Texas embraced her and made her one of their own.

The dynamic between Jesse and Allison was fantastic. There was so much chemistry and sexual tension between them; it was all but leaping off the pages. One of my favorite things about this book was Jesse’s crusade to prove to Allison that true love does exist. It was most unexpected coming from a guy like Jesse. Or, I guess, a guy like who I thought Jesse was. His efforts definitely brought the feels and smiles.

Candis Terry’s Sweet, Texas series has quickly moved to the top of my favorite contemporary romance series list. I love the characters, the romance and the small-town setting. I’m not usually someone who finds family dynamic important when it comes to books, but it’s definitely one of my favorite things about this series. I love the Wilder guys and their women. Mama Wilder is pretty freaking amazing, too. I love her meddlesome self. Bottom line, f you’re not reading this series, you’re missing out.

2 responses to “In Review: Something Sweeter (Sweet, Texas #3) by Candis Terry”