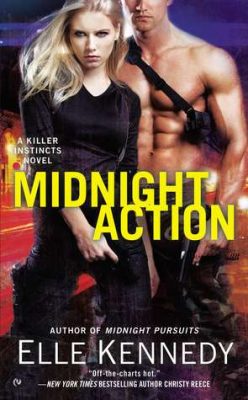 She’s got a broken heart... and a fully loaded arsenal....

Ex–army ranger Jim Morgan leads a team of elite mercenaries, but eighteen years ago in Paris, he was part of a black ops unit whose mission was to hunt down a rogue operative. In order to trap the criminal, Jim seduced Noelle, the man’s daughter—a ruthless act that cost him the love of his life and turned her into a mortal enemy. Now he can’t trust her, but he still desires her. He also needs her help....

Older, wiser, and unwilling to play the fool again, Noelle runs a group of highly skilled assassins. And she’s just been offered the hit of the century: Eliminate Jim Morgan. History gives them no reason to trust each other, but with their lives in jeopardy at the hands of a common enemy, the lines between love and hate are soon blurred. Now Noelle and Jim must face the past if they want to have a future—let alone a future together.

Throughout the first four books in the Killer Instincts series, Noelle and Morgan have an undeniable chemistry but an intense dislike for each other. I suspected they shared some type of history and whatever was between them ended poorly. The truth is, I had no idea just how complicated their past was. I couldn’t have guessed all of it if I tried. (And trust me, my wheels were turning every single time they were in the same room with each other.) I was chomping at the bit to FINALLY get to their story and it was worth every bit of the wait.

It’s tough to review this book without risking giving some of the twists and turns away, so I’m gonna keep it pretty short. I was left on the edge of my seat for a good portion of this book, just waiting to see what would happen next. And you wanna talk about sexual tension? My god. Noelle and Morgan give damn good sexual tension. I just knew these two would be combustible if they ever admitted their feelings. I wasn’t wrong. There’s a real thin line between love and hate and Noelle and Morgan dance all over it.

I’ve said it before and I’ll say it again – if you’re looking for your next favorite romantic suspense series, look no further. I continue to be impressed by Elle Kennedy’s writing, no matter the genre. I love her characters and, quite frankly, her books are like crack to me. I binge-read the entire Killer Instincts series in the matter of a week. I’m still feeling a little lost waiting for the seventh book to come out… next year. *sobs*

I received a copy of this book from the publisher, via Netgalley, in exchange for an honest review.