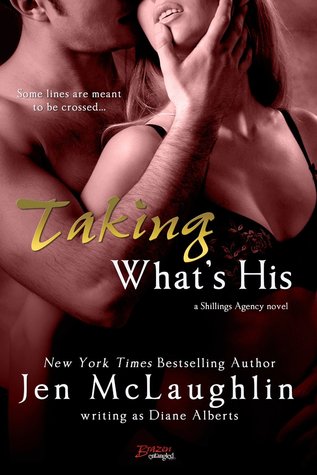 Some lines are meant to be crossed...

One explosive device was all it took to turn Holt Cunningham from ass-kicking Marine to IT technician. Hell, he's still not over it. So when the cute little strawberry blonde at the bar asks him to kiss her, Holt can't resist the temptation of a sexy distraction. Before he knows it, she's blown his mind...and then skipped out the next morning.

Lydia Thomas never expected things with Holt to go quite that far, but oh, it was worth it. After being far too good for way too long, she was ready to be bad. Except that there's that tiny detail that Lydia kept to herself-Holt just spent the night doing naughty things...with his best friend's little sister.

One night isn't nearly enough. But with his friendship on the line, how far will Holt go in order to claim what's his?

“Geeks were the dirtiest, freakiest, sexiest men of them all. Hands down. And this guy might be the king of them all.”

I thank writers like Diane, Tessa Bailey and Megan Erickson for giving me all the sexy nerd books I can handle this spring. I’ve been waiting for this to become a thing and, thanks to these ladies, it has. Y’all can keep your rockstars and billionaire playboys, I’ll have my hands full with the hot, dirty nerds. 😉

I’ve been waiting for this book since Diane told me it was coming. When she told me she had a dirty nerd book on the way and that I’d already been introduced to said dirty nerd in Seducing the Princess, I remember getting out that book and flipping through until I found him. Ah, Holt. I couldn’t have loved you more if I tried. His military history and how it left him just a bit broken was icing on the hot book boyfriend cake.

Not only did this book give me the dirty talkin’ nerd I needed in my life, it featured one of my favorite tropes – the crush on the best friend’s brother. I’m an only child, so I can’t begin to tell you just why I love this trope so much, but I do. I really do. It gets me every single time.

Lydia was a great, strong female lead. She was determined to get what she wanted – Holt – even if it meant it was only for one night and that she had to withhold some pertinent information from him. She and Holt had oodles of chemistry and I really liked them together. Opposites attract and the meeting of Holt’s darker side and Lydia’s lightness here couldn’t illustrate that more clearly. This thing between them might’ve started out as a one-night stand, but it definitely grew into something more. They had some obstacles to get through before they could make a go of it and I was in their corner, cheering them along the whole time.

I devoured this book in one sitting and I’m actually sitting here thinking about giving it a reread as I type this. Not only did it bring the sexy times you would expect from a Brazen novel, it definitely punched me in the feels a couple times, too. Taking What’s His brings a bit more emotion than the average Brazen book and I loved it. Of course, I fully believe Diane can do no wrong and I can’t wait to see what kind of sexy as sin man and strong woman she gives us next.

2 responses to “In Review: Taking What’s His (Shillings Agency #4) by Diane Alberts”