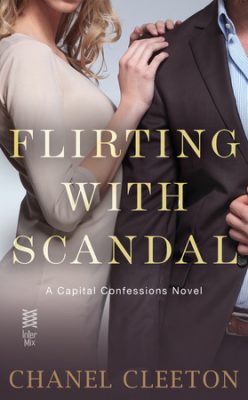 The author of I See London sets her sights on Washington, D. C., with a sexy new series about three sisters, the secrets they keep, and a powerful blog with a knack for exposing scandals...

Jackie Gardner knows all about dirty little secrets. The illegitimate daughter of one of the most influential senators in Washington, D.C., she grew up surrounded by the scandals and shadows of politics. Now that she's landed an internship with a powerful political consulting firm, she's determined to launch her career and take this city by storm.

William Andrew Clayton was born for politics. He knows the drill: work hard, play discreetly, and at all costs, avoid scandal. At twenty-six, his campaign for the Virginia State Senate is the first step to cementing his future. It's time for him to settle down, to find the perfect political spouse. He needs a Jackie Kennedy, not a Marilyn...

When Jackie meets Will in the bar of the Hay-Adams Hotel, sparks fly. But the last thing Will needs is to be caught in a compromising position, and an affair with a political candidate could cost Jackie her career. When what began as one steamy night, becomes a passion neither one of them can walk way from, they must decide if what they have is really love, or just another dirty little secret...

I’ve been anxious to read this book since I first heard about it because a) I love Chanel Cleeton’s books, b) it’s set in DC and not nearly enough books in genres I enjoy are, c) two words: political scandal, and d) forbidden romance. And holy crap, y’all, it was everything I wanted and more. Chanel’s foray into adult contemporary romance was a HUGE winner for me.

I really enjoyed Jackie and Will’s story. I was absolutely hooked on the idea of them from their very first meeting. The sexual tension between them snap, crackled and popped and I couldn’t wait for the big payoff. These two had chemistry in spades. Of course, things were also complicated between them because of who they were and who they associated with. Plus, Will’s very much in the public eye … and there’s that pesky Capital Confessions blog to worry about. 😉 Still, Jackie and Will found it impossible to stay away from each other and I’m glad. They were smoking hot together. Things were never going to be easy, but what they shared was worth the fight.

This book was just SO… DC. (I work in DC, but thankfully not IN politics. The organization I work for does have a political agenda, but I’m not involved in the nitty gritty. I do, however, hear a good deal of it from friends and coworkers, so I feel justified in making that statement.) The secrets, the lies, the shady politicians and backroom deals. SO DC. I’m always fascinated by the way policy is really set and how people are elected, but I prefer to observe from the outside. I could never actually work in politics. But damn, do I love watching TV shows and reading books about it.

It’s so satisfying when a book you’ve been anticipating lives up to every single expectation you’ve built up for it. And trust me, I build expectations high, y’all. It frequently comes back to bite me in the ass. Not with Flirting with Scandal Though. This was perfect. Sexy, scandalous and even sweet. It read like a TV show and I could picture it all unfolding before my eyes. And yes, I would absolutely tune in to watch this on a weekly basis. I loved the characters and can’t wait for more from some of the secondary characters. Starting, of course, with Blair in Playing with Trouble.

2 responses to “In Review: Flirting with Scandal (Capital Confessions #1) by Chanel Cleeton”