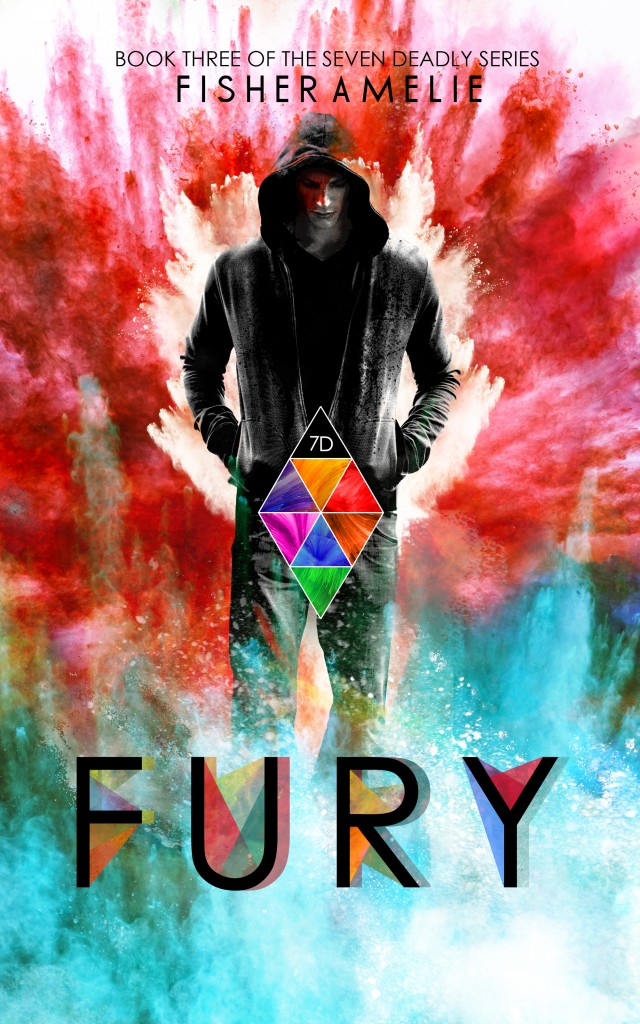 Fury by Fisher Amelie
Series: The Seven Deadly #3
Genres: Contemporary, New Adult, Romance
Publication date: May 4, 2015
Publisher: Self-Published
Format: eARC, 387 pages
How I got it: From the author
Add it: Goodreads
Buy it: Amazon | Barnes & Noble
My rating:

Can be read as a standalone.

Revenge is an euphoric thing. Trust me on this. Nothing compares to the release you get when you ruin someone’s life. When they’ve stolen important things. Things that didn’t belong to them. Things I revel in making them pay for.

What? Have I offended you? I’m not here to appeal to your delicate senses. I have no intention of placating your wishes or living within your personal belief system nor do I care if you hate me. And you will hate me. Because I’m a brutal, savage, cold-blooded murderer and I’m here for my revenge.

I’m Ethan Moonsong…And this is the story about how I went from the world’s most sacrificing man to the most feared and why I wouldn’t trade it for anything in the world.

I was late to the party on Fisher Amelie’s books. I’d seen the cover of Vain around a few times when I started blogging, but it wasn’t until after I had the pleasure of meeting her at an author event in Richmond, VA in December 2013 that I finally got around to reading one of her books. She was so sweet, I knew I had to support her by reading her books. I fell head over heels in love with Vain and absolutely enjoyed Greed as well. I couldn’t wait for Ethan’s story.

Fury was a beautifully-written book. It was dark and difficult to read at times. But, in that darkness was also hope… eventually. Ethan was NOT in a great place at the beginning of this book. He was still reeling from the loss of Cricket and was incredibly angry. He wanted revenge. He wanted Spencer and Cricket to hurt as badly as he did. I was on edge, worried about where this story would go.

Fortunately, Ethan is reunited with Finley before he can go down a dark path he can’t possibly find his way back from. Finley had a dark past, but she had channelled it into trying to do something good in the world. She helped Ethan see that was a far better option than the ones he was tempted by. I really liked Finley. Her history with Ethan was kinda complicated – they were friends, but not really close, but he had always seen her as more than he let on and she had a crush on him. I liked the connection between them. But mostly I liked how they were able to be there for each other and help the other change and heal. They unquestionably cared for each other and the romance was lovely, but not passionate. I’m all for sexy times in books, so I wish there had been some of that.

I wasn’t sure what this book would turn into. I had no idea if or how Ethan would find peace. I was totally engrossed in the storyline and there were more than a few action scenes that kept me on the edge of my seat. There were some twists and turns. And yes, it was dark. But it was a complicated kind of dark… I know I’m being vague, and that’s intentional. Fury has an untraditional path and I don’t want to tell you anything that might ruin it for you. My only complaints with this book are that sometimes it felt repetitive… and somewhat unrealistic. But, if you can suspend belief for a little while, I think you’ll be pleased with the outcome.

Fisher Amelie resides in the South with her kick ace husband slash soul mate. She earned her first 'mama' patch in 2009. She also lives with her Weim, 'Jonah', and her Beta, 'Whale'. All these living creatures keep the belly of her life full, sometimes to the point of gluttony, but she doesn't mind all that much because life isn't worth living if it isn't entertaining, right?

Fisher is the author of The Seven Deadly Series, The Sleepless Series, and Leaving Series, and was a semi-finalist in Amazon's Breakthrough Novel Award.