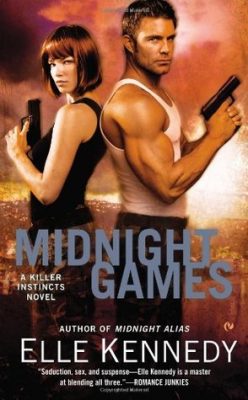 She wears a thousand deadly identities. He sees through them all.

A master of disguise, Isabel Roma spends her life pretending to be other women. Normally, her emotions are reined in tight—but sexy mercenary Trevor Callaghan has a knack for getting under her skin. The elite operative’s quiet strength and raw magnetism affect her in ways she’s never felt before, a distraction that can quickly turn deadly in their dangerous line of work.

After putting his tragic past behind him, Trevor is ready to focus on his future—and he damn well intends for Isabel to be in it. When their entire operation is thrown into chaos, Trevor enlists Isabel’s talent for deception. And as they attempt to save their team in a world where the stakes are high and the danger is grave, Trevor must convince Isabel that the woman beneath all the disguises is the one worth having...

Now that I’ve finished binge-reading Elle’s entire Killer Instincts series, I can finally sit down and write some thoughts about each of them. I was so obsessed with these books that I couldn’t even think about taking the time to write a review before jumping right into the next book. Six books, one week. Not too shabby.

When Trevor and Isabel were first paired together for a mission during Midnight Rescue, I pegged these two as a fantastic couple. Unfortunately, it wasn’t mean to be at the time. Between Trevor’s past and Isabel being closed off, I knew it would be a tough road for these two. I just hoped they would be as explosive together as I hoped. (Spoiler alert: they totally were. And I loved every minute.)

Trevor was one of the first guys in this series that I really connected with. His past was sad – the death of his fiancée impacted him in a very real way. He was a completely broken man when we met him in Midnight Rescue. I wasn’t sure he would be able to pull himself out of it either. He was reckless and wanted to die. Guilt is powerful and it had totally wrecked him. But even with all that in his head, there was a spark between him and Isabel when they very first met and it only grew stronger the more they worked together. Holy sexual tension. (Which, of course, added more to his guilt because he was thinking about someone other than Gina in this way, but it also led to his healing.)

Isabel was a tough character to connect with for awhile. She was so used to being in disguise and locking down all her emotions, I’m not even sure she knew who she was and what she wanted. She was attracted to Trevor, no doubt, but she also wasn’t ready to explore the possibility of more. She’s a kind woman underneath that tough exterior, but much like Trevor, her past continues to haunt her. Her issues with her father shaped her present. After things came to a boiling point between her and Trevor in Midnight Alias, she got scared and ran. Darn it. *shakes fist*

Midnight Games picks up five months after Midnight Alias. Isabel has been deep undercover and completely unreachable. And believe me, Trevor’s tried to reach her. She knows she hasn’t exactly been fair to him, so she returns to the compound to explain things to him and see if they can work things out. But, nothing can ever be easy. The compound is attacked shortly after her return and suddenly the romance isn’t the main storyline any longer. The compound has been destroyed. Life was lost in the attack. The head of Trevor’s team, Morgan, is missing. Noelle returns to help them find Morgan. Isabel goes undercover again and Trevor finds himself having to let go of his protective instincts for the good of the mission.

This book is full of ALL THE ACTION and suspense. It also did a great bit of justice to both Trevor and Isabel’s stories – both together and separately. I was lukewarm to Isabel going in, but by the end I was a huge fan. She was a strong woman, the type of heroine I love to read about. Sure, there were times I wanted to yell some sense into her (which, you know, would’ve ended rather poorly for me) but I got her. Trevor was golden from the start and I loved him as much at the end as I did the beginning. I loved how much progress he’d made. And it probably goes without saying that I love love loved him and Isabel together. The  sexual tension was palpable and when it finally all came to a head, it was HOT.

At the time I read this book, it was the one I was waiting on. The story I had to have. After two books chock full o’ sexual tension between Trevor and Isabel, I was ready for the payoff. I was ready to see them together. And I really enjoyed what I got with them. But, as is the norm with this series, I found myself shipping a new couple and desperately needing to find out what the real story was between them. It’s that need for existing characters’ storylines, combined with great writing, edge-of-my-seat suspense and hot and sexy romance, that led me to be so addicted to this series. It’s definitely what made me throw my reading schedule out the window so I could binge on these.

And for the record? I regret nothing.