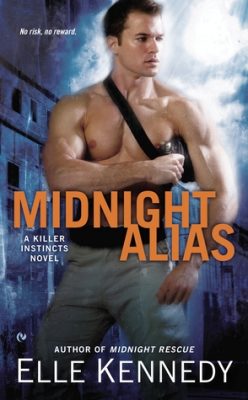 She’s smart, seductive, and in way over her head.

He’s her only way out.

An undercover DEA agent has gone off the radar. Suspecting an internal mole, the government needs Luke Dubois and his elite team of operatives to recover their man, and the New Orleans native thinks he’s found his way inside the dark underbelly of Manhattan: Olivia Taylor, the girlfriend of a mob boss and the sexiest woman he’s ever laid eyes on. His new mission objective? Get past Olivia’s defenses and convince her to take a chance—on him.

All Olivia wanted was to finish law school and live a normal life, but that dream was shattered when one dangerous night put her deeply in a mobster’s debt. Now Luke and his team will help her escape—in exchange for intel on the missing agent. But Olivia doesn’t anticipate her intense attraction to the reckless Louisiana charmer or that she’ll be forced to risk everything—including her heart.

Now that I’ve finished binge-reading Elle’s entire Killer Instincts series, I can finally sit down and write some thoughts about each of them. I was so obsessed with these books that I couldn’t even think about taking the time to write a review before jumping right into the next book. Six books, one week. Not too shabby. 😉

I liked the characters in this book a lot. Luke was a southern charmer that I couldn’t get enough of. All alpha on the outside, but with quite a heart underneath. Olivia might not have been part of Noelle’s crew, but she was still a strong woman. I admired her determination. Together, these two were amazing. They had tons of chemistry and even though there was a lot at stake, I couldn’t help but root for them. They were just so right together.

Not only did this book have great romance and some serious heat, but it had all the action and suspense I’d come to expect from this series, even early in. The strip club setup isn’t necessarily new to books, but Elle owned it and put her own spin on it. I couldn’t help but wonder if Olivia would ever trust Luke, if she would be able to get away from Vince and just how everything would wrap up with this mission.

Midnight Alias was a great follow-up to Midnight Rescue. Several of the underlying storylines continued into this book, which is part of the reason why I found myself bingeing on these hard. I needed to get to Trevor and Isabel’s book. I had to know what the real story was between Noelle and Morgan. I wanted all of it and I wasn’t going to stop until I got it. And I’m glad I didn’t, because what a series!

If you like your romance wrapped up with a whole lot of suspense and action, look no further. Elle Kennedy’s Killer Instincts will be your new favorite series.