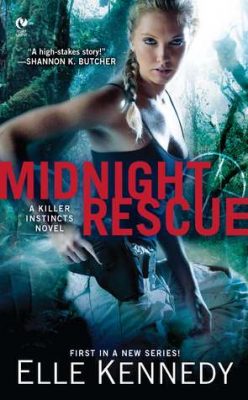 Midnight Rescue by Elle Kennedy
Series: Killer Instincts #1
Genres: Adult, Romance, Suspense
Publication date: May 1, 2012
Format: eARC, 368 pages
How I got it: From the publisher
Add it: Goodreads
Buy it: Amazon | Barnes & Noble
My rating:

Abby Sinclair had a desperate childhood until she was rescued and adopted by a retired army ranger who molded her into a master of self-defense. Now, she's a cunning and fearless assassin thrust into assignment after dangerous assignment, using everything she has-nerve, resilience, strength, sex-to come out on top. Her only rule: trust no one.

Abby's latest assignment is in Columbia: go undercover and snuff out a dangerous arms dealer active in the underground sex trade. But when Abby purposely blows her cover in a last-ditch attempt to free the helpless victims, deadly mercenary Kane Woodland is recruited as back-up. His mission: get Abby out of that hell hole.

The last thing Kane expects is to feel a primal attraction for Abby. But when she convinces him to join her on her perilous mission, their newfound passion could put the lives of their whole team at risk.

Of all the romance genres, romantic suspense is probably the one I shy away from the most. I’ve definitely enjoyed some good books in that genre, but have had nearly as many failures as successes, so I’m not always quick to pick one up. After thoroughly enjoying Elle’s Brazen books and her new adult Off-Campus series – and seeing an author whose work I love talk about this series on Twitter, I knew I had to give it a try. I am so flipping glad I did, too. I *really* enjoyed this and have already chucked aside other review books to start the second book in the series.

It didn’t take long at all for me to get sucked into Abby and Kane’s story and to get involved in the lives of the other characters in this book. I like that while it was obvious this was primarily about Abby and Kane, we were introduced to several other characters and got the backstories of several of them. Abby was a badass and I liked her from the start. She was rough around the edges and not like most of the women I find in the books I typically read, but that was what I liked about her. She was edgy, brave and driven. But, as much as I liked those qualities, I couldn’t help but appreciate the way Kane was able to draw another, softer side from her – all while showing her that sex can be about more than power. Kane was hot, sexy and protective – just like I like my alpha males. They were an explosive match and the slow burn of sexual tension was nearly as intense as the action surrounding the rescue storyline.

Midnight Rescue was sexy, suspenseful and all-consuming. I read this one from cover to cover, so to speak, in the matter of just a few hours. Unfortunately for me, I started it right before bed one night and actually dreamt about it. That’s how invested in the story I was. I’m only a chapter or so into the second book right now, but I can tell you already there will be no rest until I finish it. I need more of all of the characters. I’ve already started pairing people off in my head, so I can’t wait to see if it all plays out like I want it to. And, of course, I want to see what kind of situations they find themselves in along the way.

I’m completely and totally hooked. And the best thing? By waiting until now to read them, I can totally binge-read. And, believe me, I will.