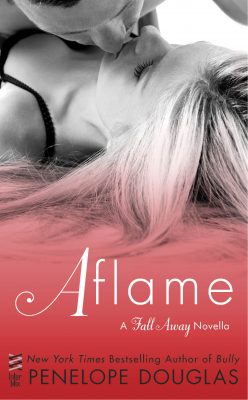 The tables have turned. Now I have the power—and it’s his turn to beg…

Everyone wants to be me.

Maybe it’s the sway of my skirt or the way I flip my hair, but I don’t care. Even though their attention is the last thing I crave, I just can’t stop. I dominate the track, the speed rattles my bones, and the wind and the crowd screams my name.

I’m her. The girl driver. The queen of the race. And I’m surviving—something he thought I’d never do.

They all still talk about him. Did you see Jared Trent on T.V? What did you think of his last race, Tate? When is he coming back to town, Tate?

But I refuse to care too much. Because when Jared does come home, I won’t be here.

I’ve been waiting to read Aflame since the final chapters of Falling Away ripped Tate and Jared’s HEA out from under me. I fell in love with these characters and the thought they might not make it was actually painful. The excerpt at the end of Falling Away shattered me. I couldn’t get my hands on Aflame soon enough. Thanks to the publisher, I didn’t have to wait all that long to find out what would happen. With wine and tissues on standby, I dove right in. I was prepared for all the feels. Spoiler alert: there were plenty of them.

I’m not going to tell you much about this book. I don’t want to run the risk of ruining a single part of this conclusion for you. If you’ve followed this series from the start, you just need to grit your teeth and read it. I won’t lie, it’s difficult at times. But it’s also incredibly real and raw and, now that it’s over, I can’t imagine it not existing. It added an important layer to Tate and Jared’s story. Yes, they’ve loved each other for years, but they both needed to grow up and find themselves before they could even try to make a real go of it as adults.

Aflame is about Jared and Tate and their attempt to coexist as they find themselves back in their hometown and maybe, just maybe, find their way back to each other. It’s also a great conclusion to the entire Fall Away series and you can expect updates on all your favorite couples. *squee* I loved seeing them all in one place again and finding out what was going on in their lives. As much as I want for more because I love these characters so much, I’m content with where things were left. I think fans of the series will be as well. I’ll definitely miss Tate, Jared, Madoc, Fallon, Jax and Juliet.