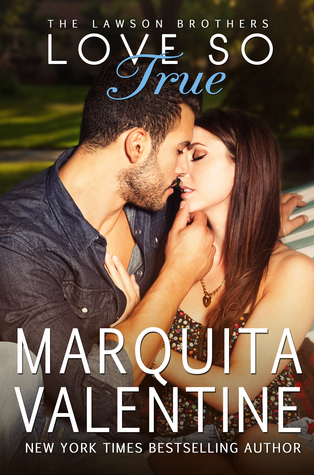 Love So True by Marquita Valentine
Series: The Lawson Brothers #2
Genres: Contemporary, New Adult, Romance
Publication date: January 29, 2015
Publisher: Self-Published
Format: eBook, 202 pages
How I got it: From the author
Add it: Goodreads
Buy it: Amazon | Barnes & Noble
My rating:

Finally, Lucas Lawson is a free man. After serving five years in prison for embezzlement, he’s come home to Jessamine to right the wrongs he committed against his friends and family. But, it won’t be easy. For starters, the brother he’s looked up to his entire life wants nothing to do with him, and no one in town trusts Lucas enough to give him a chance to make amends. Until, Bailey Yates gives him a job at her family’s diner.

Single mom, Bailey Yates, has had enough of bad boys to last her the next eighteen years. She’s always been a sucker for them, and Jessamine’s ultimate bad boy, Lucas Lawson, is no exception. So, when he returns to town, naturally she’s drawn to him. And naturally, she must avoid him at all costs—no matter how sexy he is. She’ll give him a job, and keep her distance…until Lucas saves her son from a hit and run.

Bailey gives Lucas a hope for the future he hasn’t allowed himself to feel in years while Lucas melts Bailey’s heart every time he spends time with her son. Could he be the one to put her life back together? But when Lucas is accused of stealing from a local charity, Bailey must decide to support him or realize that some men are too good to be true.

I’m a sucker for a second chance story, so I knew I’d really enjoy Love So True as soon as I read the synopsis. I was looking forward to meeting Lucas and seeing how he was trying to get back on his feet – and make things right – after his time in prison. Of course, the love of a good woman can’t hurt, so I was anxious to see how he and Bailey would come together, too.

I really liked Lucas. I was on his side from the start. He made it easy. There was no question he was sorry for the things in his past and was eager to fix things as best he could. I really loved his brother Brody in the first book, Love So Hot, but he really tested my patience here. I wish he had been quicker to forgive Lucas and give him the brotherly support he so badly wanted.

Bailey was a great heroine. She was likable and real. She wasn’t perfect. She had a past. She was a good mom and a hard worker. I loved how she was willing to take a chance on Brody – both as an employee and then, ultimately, as a romantic partner. He needed someone to believe in him. She was definitely that person.

Lucas and Bailey made a great pair. They had chemistry in spades and it was easy to see how much they cared for each other. I liked that this was a second chance of sorts for them, too, after having shared a kiss when they were younger. They had some smokin’ hot scenes together too. I really liked how they supported each other most of all though. She gave him a job and the trust he needed and he helped her become stronger and more willing to stand up for herself where her parents were concerned.

Love So True was a great addition to Marquita’s Lawson Brothers series. It was a quick read that I wish had lasted even a little bit longer, but I thoroughly enjoyed it. It was impossible to not root for a man getting a second chance at life and love … and the woman helping him. I’m definitely enjoying this series and anxious to learn more about some of Jessamine’s other residents in future books!