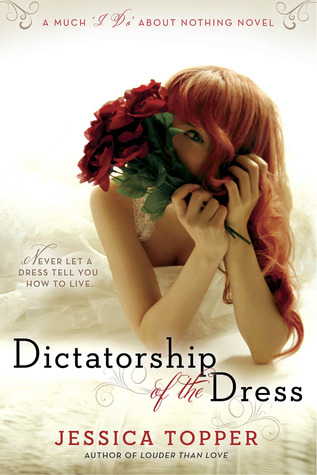 Dictatorship of the Dress by Jessica Topper
Series: Much "I Do" About Nothing
Genres: Adult, Contemporary, Romance
Publication date: January 6, 2015
Publisher: Berkley
Format: Paperback, 344 pages
How I got it: From the publisher
Add it: Goodreads
Buy it: Amazon | Barnes & Noble
My rating:

As the dress-bearer for her mother’s wedding, comic book artist Laney Hudson has a lot more baggage than the bulky garment bag she’s lugging from New York to Hawaii. Laney is determined to prove she’s capable of doing something right, but running chores for her mom’s fairytale nuptials is proving to be a painfully constant reminder of her own lost love.

So when she’s mistaken for the bride and bumped up to first class, Laney figures some stress-free luxury is worth a harmless white lie. Until the flight crew thinks that the man sitting next to her is Laney’s groom, and her little fib turns into a hot mess.

The last thing Noah Ridgewood needs is some dress-obsessed diva landing in his first-class row. En route to his Vegas bachelor party, the straight-laced software designer knows his cold feet have nothing to do with the winter weather.

When a severe storm leaves them grounded in Chicago and they find themselves booked into the last available honeymoon suite, Laney and her in-flight neighbor have little choice but to get better acquainted. Now, as her bridal mission hangs in the balance, perhaps the thing Laney gets right is a second chance at love.

Jessica Topper is a “new-to-me” author, but with a cover like that and a ridiculously cute pun-tastic series name, I had to give this book a chance. And I’m really glad I did! It’s different than a lot of the contemporary romance I typically read – and that’s not a bad thing.

If I’ve said it once, I’ve said it a hundred times (at least) – I am a fan of books and movies in which two characters are pushed together for a limited amount of time, in a situation out of their control. I love seeing how people connect in times like those. That’s exactly what happens with Noah and Laney here as they are mistaken as a soon-to-be-married couple – solely because of proximity and the fact that Laney’s carrying her mom’s wedding gown. When their connecting flights are grounded due to weather, they find themselves checking into the honeymoon suite at a hotel. That’s when the story really begins.

I’m all for the one-night stands, but I LOVE that it’s not what happened with Noah and Laney. Sure, there was an attraction, but she’s dealing with the baggage from her past and Noah is dealing with his present/future. It’s through the course of a lot of talking while stranded together that they get to know each other and things slowly develop. It wasn’t even about the slow burn here as much as it was just about these two characters getting closer as Laney lets go of the past and Noah realizes he wants a different future than the one he’s currently heading towards.

I started Dictatorship of the Dress expecting a light and fluffy read. It wasn’t that. It wasn’t necessarily tough and angsty either, but definitely landed somewhere in between. There was a lot of inner dialogue and reflection as Laney thinks back on what happened with her childhood love, Allen, and as Noah thinks about his engagement to the fairly loathsome Sloane. But there were sweet, romantic moments laced throughout, as well as a healthy dose of humor and heart. I really liked the characters and the path they were on. And, with an ending like that one, there’s no way I couldn’t be utterly charmed by the whole experience.

I enjoyed this book – and Jessica’s writing style. I’m already eagerly awaiting Dani’s story in Courtship of the Cake. 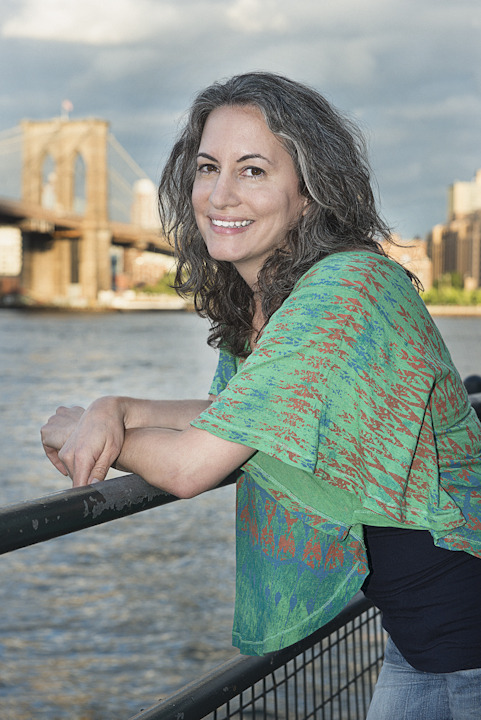 Jessica Topper is an ex-librarian turned rock n' roll number cruncher. She can trace her love for the written word back to age three, when she memorized Maurice Sendak's "Chicken Soup with Rice" in its entirety.

After her daughter was born, Jessica left the Manhattan library world and began working for her husband's music management company. He offered her a part-time bookkeeping job so she could "stay home for the baby's first year" and pursue her dream of writing.

The baby is now thirteen, and Jessica has been working her full-time, sold-her-soul-for-rock-n-roll job as Office Manager for veteran jam band moe. ever since. She may have traded in books for bookkeeping, but the written word is never far from her mind, or her heart.

Tags: 4 Star Review, Dictatorship of the Dress, In Review, Jessica Topper, Much "I Do" About Nothing