Welcome to my stop on the blog tour for Abbi Glines’ latest, When I’m Gone. I’ve been waiting for Mase’s story forever, because who doesn’t love a hot cowboy with a heart? It was totally worth the wait. 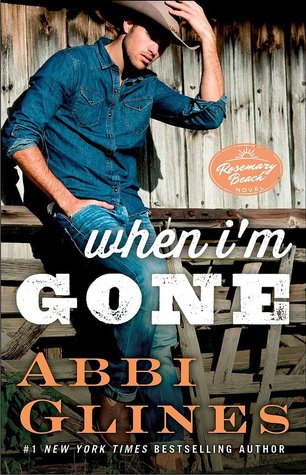 From #1 New York Times bestselling author Abbi Glines comes the next new adult novel in the Rosemary Beach series, in which we meet Mase, a Texas heartthrob first introduced in Take a Chance who comes to Rosemary Beach to stir things up.

I had an urge to fix all her problems. Which was stupid. She was doing fine without me. But something about those big eyes…

Mase Colt-Manning has always preferred his humble life as a Texas rancher to his birthright as the son of a legendary rock star. In fact, he rarely visits his father’s rarefied world in Rosemary Beach, especially if it means bunking at his vile half-sister Nan’s house—until one visit leads to a chance encounter with a young, gorgeous house maid who awakens him with her off-key but spirited imitation of a country music star…

Reese Ellis finally has her freedom. After escaping a lifetime of abuse from her parents and classmates for an undiagnosed learning disorder, she seizes the opportunity to be a house maid to some of the richest families in Rosemary Beach. But her job is in jeopardy when she causes an accident at the home of her most important client, Nan Dillon. When a hot, half-naked stranger with a cowboy’s swagger comes to her rescue, she’s intrigued—then afraid once he shows his own interest. Reese has never met a trustworthy man in her life. Will Mase be any different?

I’m a big fan of Abbi Glines’ Rosemary Beach series. I have been ever since I was first introduced to Rush and Blaire … years ago. I’m so glad it’s continued as long as it has because I’ve loved each of the characters and couples. Mase and Reese’s story was a great addition to this series.

On the surface, this might look like another rich guy/poor girl pairing, but it was more than that. Reese broke my heart. She had suffered so much growing up – first because of an undiagnosed learning disability that led everyone to believe she was just stupid and then because of her abusive stepfather. Her mom was truly a terrible person. I’m talking ZERO redeeming qualities. When she chose to support her husband over her daughter and kicked Reese out of the house, I was happy. Reese couldn’t do any worse on her own than she did with “parents” like those.

Mase has been around a fair few books now, but I’ve not gotten much of a read on him. He seemed like a good guy – and who doesn’t love a hot cowboy – so I was eager to get his book. I can honestly say that, next to Rush, he’s probably my favorite guy in this series. He was just a good guy. While his initial impression of Reese was how hot she was (and how bad of a singer!) I loved that he saw something more in her. After years of being treated like she was good for nothing but where her looks and body would take her, it was time someone took interest in what’s underneath.

I really liked Mase and Reese together. They clicked from the start and were good together. I know Reese was more than a bit hesitant because she didn’t understand his motivations and didn’t realize how into her he was. The reader knows because we get chapters from both of their POV – and I love that. They had some pretty hot scenes, too… and I really liked that they didn’t jump right to the sex. It would’ve been unrealistic considering Reese’s history. Things aren’t totally perfect between them, of course. Without getting too spoilery, there’s a pretty big miscommunication that causes some serious drama. Regardless, I was always pretty sure they’d find their way back to each other. They just needed some time.

We get a peek into the lives of some of the other Rosemary Beach characters during this book too. Spoiler alert: Rush is still dreamy and Nan is still a complete and total biatch. Are you shocked? Me either.

When I’m Gone was a great addition to the Rosemary Beach series and I thoroughly enjoyed it. But, fair warning – it ended with one helluva cliffhanger. It wasn’t relationship-related, but something else entirely. After reading the blurb for the second part of their story, When You’re Back, I’m a little concerned about what will happen for this couple, but I trust Abbi to pull it all back together and give them the HEA they deserve.

You Were Mine (Rosemary Beach #9)

Visit the Rosemary Beach Club to enter to win either a grand prize of Abbi’s Favorite Things + the entire Rosemary Beach Series from Atria Books or one of the runner up prizes of one of four signed copies of ONE MORE CHANCE.