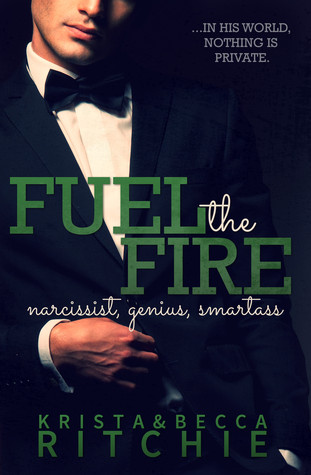 It’d take the impossible to hurt Connor Cobalt, even for a moment.

At twenty-six, his narcissistic tendencies have made room for the people he loves.

And he loves Rose. But when his love is threatened, when his greatest dreams with her are compromised — what is the cost then?

Love will guide his choices.
For the first time in his life.

It's highly recommended to read the books in the recommended reading order, which is in tangent with the Addicted series. If you choose not to read Addicted After All before Fuel the Fire, there will be a time jump.

I don’t even know what to say about Fuel the Fire. Seriously. Two days after finishing, I still feel somewhat fragile emotionally and I’m so sad to say goodbye to Connor and Rose’s story arc. There’s not a whole lot I can tell you without running the risk of spoiling an amazing storyline for you, but I’ll do what I can.

As you know, Fuel the Fire is the second and final part of Connor and Rose’s story arc. (Of course they’ll show up in Long Way Down, but we won’t get any more books from their POVs. *sob*) I won’t tell you all the things that went on for the couple during this book, but I will tell you I love and respect them even more now that I did when I started. They dealt with some hardcore issues and I had no idea how things would turn out for them. I was absolutely on the edge of my seat as one thing after another came their way.

Fuel the Fire was an intense read. I wasn’t sure I would make it to the end in one piece because it felt like with every new issue, a small part of my heart shattered. So yes, it was angsty. It was emotional. Parts of it hurt to read. I was pretty sure Krista & Becca wouldn’t hang us readers out to dry and I was right… but there were definitely some moments I began to wonder how on earth everything could come back together again.

This book had the sensual sexy times I’ve come to expect from Rose and Connor and all the friendship and family love that make this series stand out among all the others. There’s just something about this group of characters. I don’t think I’ve connected so deeply with a series since Harry Potter. Each one of these characters brings something unique and amazing to the group, but the way they fit together is what makes it so special. They would go to the ends of the Earth to support each other. I love that.

If you’re a fan of the series, you’ll undoubtedly want to read this book. If you love character-driven novels and you’re NOT reading this series, you should get on that. The first book is the toughest to get through – not because it’s not good, but because it’s real and raw and deals with addictions in a frank way I feel most books don’t. But, my gods, once you get into the series, it gets under your skin. The characters wiggle their way into your heart. I know they have mine. I can’t believe there’s only one book left in the series. I want the conclusion of Ryke and Daisy’s story, but I’m not sure how I’ll say goodbye to these characters. I guess I’ll cross that bridge when I come to it.