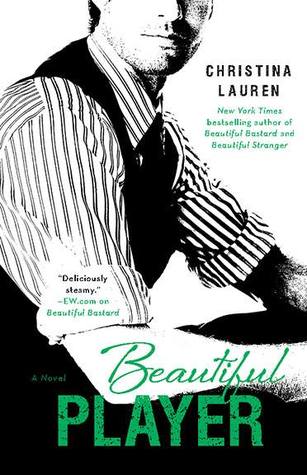 A bombshell bookworm. A chronic Casanova. And a lesson in chemistry too scandalous for school.

When Hanna Bergstrom receives a lecture from her overprotective brother about neglecting her social life and burying herself in grad school, she’s determined to tackle his implied assignment: get out, make friends, start dating. And who better to turn her into the sultry siren every man wants than her brother’s gorgeous best friend, Will Sumner, venture capitalist and unapologetic playboy?

Will takes risks for a living, but he’s skeptical about this challenge of Hanna’s…until the wild night his innocently seductive pupil tempts him into bed- and teaches him a thing or two about being with a woman he can’t forget. Now that Hanna’s discovered the power of her own sex appeal, it’s up to Will to prove he’s the only man she’ll ever need.

Just this past week one of my friends told me the Beautiful Bastard series books are “her crack.” I couldn’t agree more. I find myself hopelessly addicted to each new pairing and their story. This series just keeps getting better and better.

What I loved most about Beautiful Player was the pairing of Hanna and Will. I liked that they had a long history of friendship and that it slowly built into something more as he tried to pull her out of her shell. Their banter was amazing and I found myself chuckling with nearly every interaction… at least in the early stages. I loved how Hanna was so forth-coming and open about sex (and everything else) and how shocking Will found that. This might have been an unlikely pairing in the beginning, but it totally worked for me. They had great chemistry that eventually grew into steamy sexy times.

The only downside to this book was the lack of communication and thus the misunderstandings between these two. It was really frustrating at times, but not enough to change my feelings about the book. It just made me want to handcuff the two of them together and make them talk until they worked things out. I liked them so much together that it kinda sucked when they weren’t.

One thing I love about series like this one is that with each new book, not only do we meet a new couple to cheer for, but we get to catch up with the couples from earlier in the series. I freaking love the bromance between the men in this series. It, much like the books themselves, gets better with each new installment. I love how these guys give each other a hard time, but always with their best interests at heart. There’s something so real about the friendships in this book. I swear, I read them nearly as much for the friendships as I do the couplings.

Now that I’m caught up on all the full-length novels, it’s time to conquer the novellas. 🙂

One response to “In Review: Beautiful Player (Beautiful Bastard #3) by Christina Lauren”