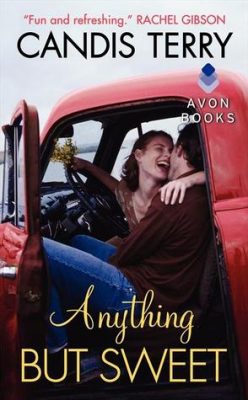 Anything but Sweet by Candis Terry
Series: Sweet Texas #1
Genres: Adult, Contemporary, Romance
Publication date: June 25, 2013
Publisher: Avon Books
Format: eBook, 384 pages
How I got it: I bought it!
Add it: Goodreads
Buy it: Amazon | Barnes & Noble
My rating:

If Charlotte Brooks thinks she and her TV makeover show can turn Reno Wilder’s hometown upside down, he’ll be happy to prove her wrong. The x-Marine has seen too much turmoil and he likes Sweet, Texas, just the way it is. Traditional. Familiar. A little dull. Everything Charli isn’t. But instead of backing off from his scowls like everyone else, Charli digs in her skyscraper heels.

Reno Wilder is a one-man unwelcoming committee, but Charli isn’t budging. It’s clear the gorgeous cowboy needs an overhaul just as much as Sweet. Someone needs to break him out of that gruff shell and show him how fun and rewarding a little change can be.

THEY’RE ABOUT TO FIND THAT LOVE IS ANYTHING BUT PREDICTABLE.

One of the things I’ve learned about myself over the last few months is that I really, really enjoy a good adult contemporary romance. I never really thought they were my thing. I always gravitated more towards young adult, new adult or … the dirtier, edgier adult romances. The sweet little covers on mass market paperbacks didn’t appeal to me. After discovering books by authors such as Macy Beckett, Julie Brannagh and now Candis Terry, I realize just how misguided I’ve been. These books are just as sexy as their trade paperback counterparts, and often without the angst those bring.

I picked up Anything but Sweet when it was a freebie on Amazon after seeing glowing reviews for it – and the rest of the series – from a friend/near book twin on Goodreads. She’s often talked about how much she loves this series and the setting of Sweet, Texas, so I had to see what all the fuss was about. And, I gotta say… I’m a believer. If I ever wanted to get out of the city and move to a small town in the south, Sweet, Texas would be near the top of my list of places to move. (Assuming it’s real and the residents are as quirky and genuine as they’re portrayed here, of course.)

Anything but Sweet was just a fun read. The cast of characters – right down to the smallest part – was great. The setup was unique to me. I loved the idea of a city girl designer and her crew taking on a makeover on a small town where things are slow to change. And the resistance from small town cowboy Reno made it all the more realistic.

Charlotte and Reno were, of course, two of my favorite parts of the book. I loved how she wanted to push his boundaries, but was cautious not to go to far. He was (more than) a bit stubborn, but there was something I liked about him from the start regardless. He had a lot of pride of and respect for the past. He’d lost a lot over the course of his life, so it was understandable that he would resist the idea of losing more. He was too far into it to see the possibility that change could bring.

This book was big on heart and feels. I felt like I really got to know so many characters – well beyond just Charlotte and Reno. His family was wonderful. I love when there’s a strong family unit in a book. Sure, they have their problems, but lack of love for each other isn’t one of them. I am definitely looking forward to continuing on with this series and see what will come of the other Wilder boys and the residents of Sweet, Texas.

2 responses to “In Review: Anything but Sweet (Sweet, Texas #1) by Candis Terry”