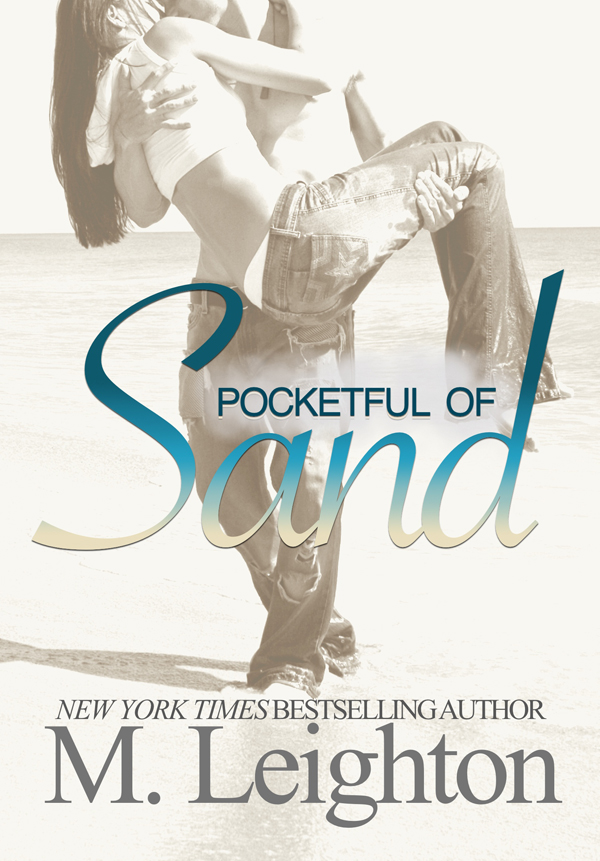 Pocketful of Sand by M. Leighton
Genres: Adult, Contemporary, Romance
Publication date: March 15, 2015
Publisher: Self-Published
Format: eARC, 213 pages
How I got it: From the author
Add it: Goodreads
Buy it: Amazon | Barnes & Noble
My rating:

“She’s beauty for my ashes. And I’m hope for her heartache.”—Cole Danzer.

I don’t know what makes a great love story. Is it that instant attraction when boy meets girl? The passionate kisses and the fairy-tale ending? Or is it a lifetime of tragedy, paid in advance, for a few stolen moments of pure bliss? The pain and the suffering that, in the end, you can say are worth it for having found the missing piece of your soul?

**Contains material that some may find disturbing. Not intended for readers under the age of 18**

I have to start this review out with a confession. It’s pretty embarrassing, too. Before this book, I’d never read an M. Leighton book. I know. I’m so ashamed. Even worse? I own most of her books. I just hadn’t made time to read one yet. But now I can say I’m officially hooked and intend to start chipping away at her backlist soon.

I really liked the characters in this book. Eden was a wonderful mom. It was clear she was on the run, hiding from something in her past, but we don’t know what right away. Her daughter, Emmy, was painfully withdrawn and didn’t speak to anyone but her. She hides from nearly everyone, but that changed the day she saw the man building sandcastles on the beach in their new town. She was intrigued by him and connected with him. And, so did Eden.

Cole was dealing with his own painful past and the loss of his young daughter, Charity. Again, we don’t know the full story right away, but we can see how whatever happened affected him. Rumors around town are that he’s crazy, but in reality, he’s just a man mourning his daughter. A man with a load of guilt. My heart ached for him.

I liked how things built between Eden and Cole. It wasn’t immediate, despite the initial spark. They took their time getting to know each other and sharing their own pasts, learning to trust each other. It was raw and emotional, but gave me hope that together they could move forward. I loved watching as they began working towards a beautiful second chance together.

Pocketful of Sand wasn’t necessarily an easy read, but my goodness, I haven’t stopped thinking about it since I finished. It was a pretty heavy story, emotionally, so make sure you’re ready for a book like that before you start. It was heartbreaking and hopeful. There were some unexpected twists and turns and, while I’m not going to give you any spoilers, an ending that I can’t stop thinking about. Oh, and please take the warning in the blurb to heart. There are some rather disturbing issues tackled in this book, though thankfully none of them are written in vivid detail.

New York Times and USA Today bestselling author M. Leighton is a native of Ohio. She relocated to the warmer climates of the South, where she can be near the water all summer and miss the snow all winter. Possessed of an overactive imagination from early in her childhood, Michelle finally found an acceptable outlet for her fantastical visions: literary fiction. Having written over a dozen novels, these days Michelle enjoys letting her mind wander to more romantic settings with sexy Southern guys, much like the one she married and the ones you’ll find in her latest books. When her thoughts aren’t roaming in that direction, she’ll be riding horses, swimming in ponds and experiencing life on a ranch, all without leaving the cozy comfort of her office.

3 responses to “In Review: Pocketful of Sand by M. Leighton”