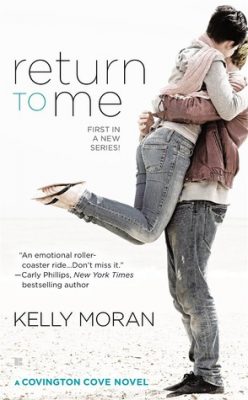 Return to Me by Kelly Moran
Series: Covington Cove #1
Genres: Adult, Contemporary, Romance
Publication date: March 3, 2015
Publisher: Berkley
Format: Paperback, 286 pages
How I got it: From the publisher
Add it: Goodreads
Buy it: Amazon | Barnes & Noble
My rating:

Ten years ago, Cole Covington was just another rich kid who got everything he wanted—including young and trusting Mia Galdon. Then one night everything changed, and two hearts were shattered. Cole buried his guilt in the military, where love was just part of the past. Now Cole has come back home, emotionally damaged, guarded, and unprepared for what’s waiting for him…

At the urging of Cole’s sister, Mia has returned to the Covington family’s coastal home in Wilmington as a private nurse to help Cole recover. With her uncertain personal life at a crossroad, Mia doesn’t have the luxury of saying no to the job. And she soon finds out that the attraction is still alive. So are memories of betrayal. But Mia will discover more than the power of resilience. She’ll discover a secret Cole has held for years, one that will force them to confront the past and give new meaning to letting go, forgiveness, and a future worth fighting for.

Return to Me was a sweet little contemporary book with a wounded hero and a great second chance romance. I absolutely adored the characters and enjoyed reading along as they tried to put themselves back together and find their way back to each other.

It’s been ten years since Mia has seen Cole Covington, his family or the house where she spent a lot of her time as a teen. She was the daughter of the “help” for Cole’s rich (and assholish) family, but the bond between her and Cole was something real (against the best wishes of his family). After Cole broke her heart and tragedy struck, she found a way to move on. She fulfilled her dreams of being a nurse, cared for her younger sister who has Down Syndrome, dealt with her mother’s death and built a pretty good life for herself. She’s beyond surprised when Lacy Covington contacts her and asks to see her. She’s shocked to learn that Cole has joined the military and was severely injured overseas. But shock doesn’t even begin to cover what she feels when Lacy asks her to return to the old Covington beach house and help watch after Cole. Those are wounds Mia isn’t in a great hurry to reopen, but she can’t refuse Lacy’s offer.

Returning to the beach house wasn’t easy. Seeing Cole again was even more difficult. His (internal and external) wounds have made him a different person than the boy she fell in love with. He’s dealing with PTSD and nightmares, along with his physical injuries. He’s shocked to see Mia and tries to push her away. But, at the same time, he really wants her there. He regrets so much of his past, but little more than how things fell apart after he ended things with her. He aches for a second chance, but he’s not the man he once was.

Mia and Cole didn’t fall into an easy friendship immediately, but you could see the ghost of their past and what they meant to each other in their interactions. Mia pushed him. He pushed back. They slowly started rebuilding their friendship and dealing with the still-lingering feelings they had for each other. Had enough changed in their lives (and with his family) to afford them the second chance they deserved?

I really liked the characters here – both main and secondary. Mia was a strong, independent woman and I appreciated that. Cole, while a little broken, was still a remarkable man. His sister, Lacy, was fantastic and the relationship she had with Cole and Mia was so realistic. I really hope she gets a book of her own in the future. I’d love more from her. I enjoyed the staff members at the beach house as well. Especially Rose. She was a great friend to Mia (and Cole) and helped her get perspective when she needed it most. The only character I really didn’t like in this book was Cole’s mom. She was an asshole. But, the other characters more than made up for her.

This was the first book I’ve read by Kelly Moran, but it definitely won’t be the last. I enjoyed her writing style and the Covington Cove characters and setting. I’m already excited for All of Me, the second book in this series. 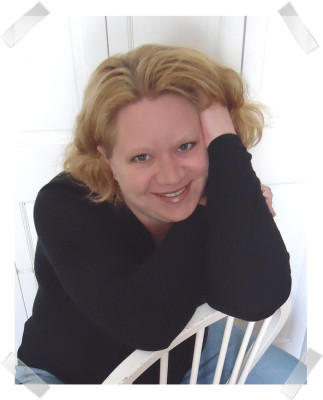 Kelly's interests include: sappy movies, MLB, NFL, driving others insane, and sleeping when she can. She is a closet caffeine junkie and chocoholic, but don't tell anyone. She resides in Wisconsin with her husband, three sons, and her black lab. Most of her family lives in the Carolinas, so she spends a lot of time there as well.

One response to “In Review: Return to Me (Covington Cove #1) by Kelly Moran”