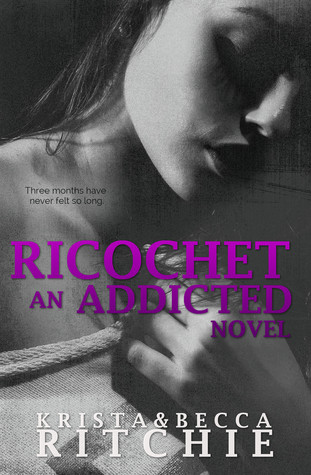 As a sex addict, Lily Calloway must do the impossible. Stay celibate for 90 days.

Cravings and fantasies become her new routine, but while Loren Hale recovers from his alcohol addiction, Lily wonders if he’ll realize what a monster she really is. After all, her sexual compulsions begin to rule her life the longer she stays faithful to him.

Progress. That’s what Lily’s striving for. But by trying to become closer to her family—people who aren’t aware of her addiction—she creates larger obstacles. When she spends time with her youngest sister, she learns more about her than she ever imagined and senses an unsettling connection between Daisy and Ryke Meadows.

With Lily and Lo’s dysfunctional relationship teetering and unbalanced, they will need to find a way to reconnect from miles apart. But the inability to “touch” proves to be one of the hardest tests on their road to recovery. Some love brushes the surface. Some love is deeper than skin.

Lily and Lo have three months to discover just how deep their love really goes.

I’ve spent months (or has it been more than a year now?) talking about Krista & Becca Ritchie’s books and my love for all of them. If you follow my reviews at all, you know this. I have a confession to make. I NEVER READ RICOCHET. I skipped right over it. Now I’m totally kicking myself because I missed so much freaking character and relationship development. Why did I skip it? Well, it was early on in my love affair with this series and I underestimated the importance of “novellas” in it. In other series, novellas are skippable. They’re not in the Addicted series. Of course, I want every single little bit of story I can get about these characters…

I was more than a little nervous going into Ricochet for the first time. With Lily barely battling her sexual addiction, I was worried what would happen with Lo in rehab. Would she be able to stay strong? Would she crack? Would she cheat? What was going to happen to them as a couple? (Of course, I know the answers to some of these because I’ve read other books in the series, but I didn’t know what might’ve happened before they got to the place they’re in now.) I made myself half sick thinking about the possibility of her giving in and hooking up with someone else. Also, I knew I would miss their interactions during this book with them being away from each other. I adore them together, even with all their issues (or maybe because of their issues) and I crave quality Lily and Lo time. I knew I wouldn’t find that here. But, what I found was just as good.

Another confession: I’m in love with Ryke. Don’t get me wrong, I love every single one of the big six characters in this series, but there’s something about Ryke that I connected with nearly from the start. I can’t pinpoint it, exactly, but I think it’s the fierceness with which he protects those he loves, which is such a stark contrast to his hard exterior and amazingly foul language. (Of course, I’m a huge fan of Ryke’s favorite swear word, too… so that might have something to do with it.) There’s so much Ryke in this book. I hate that I skipped over it before, because now I just love him even more. Whether it was his first scenes (and the ones that followed) with Daisy or the honest way his friendship with Lily developed, I feel like I got so much of a better handle on his character during Ricochet.

I knew from the later books in the series that Lily and Ryke have a special kind of friendship. (And no, I don’t mean that in a dirty way.) I just didn’t know how it all came about. Now I have those answers. And it was perfect. There’s so much of an emphasis on them in this book, in Lily slowly coming to trust and understand Ryke as he helped her deal with her addiction while Lo was away. Ryke’s not perfect, and he slips up in this book when it comes to Lily and Lo, but he admits when he’s wrong. Just one more reason I love him so much.

This book was quite a bit easier of a read than Addicted to You was. It still deals with some rather heavy topics, but the vibe was different. (Of course, I think each book in the series has a different feel and that’s why I love it so much.) I know it’s way too soon to be shipping Ryke and Daisy, but damned if I could help myself from getting a big, goofy grin on my face during their harmless flirtations. Their scenes were just as golden to me as those with Ryke and Lily.

I was already a Lily fan, of course, but had I been on the fence about her, this would’ve been the book that won me over. She did such a great job battling her addiction during Lo’s absence. I feel like her strength and determination was really highlighted well in this book. It’s not to say it was easy, or that there weren’t temptations, but her love for Lo and what they have together was worth fighting for. And with the help of her friends and sister, she would make it.

I could seriously go on all day about the characters in this book and the series as a whole. I can’t NOT mention Rose and Connor in my review. They were both an important part of Lily’s battle during this book. Rose might have an icy exterior, but I wouldn’t want to get between her and someone she loves. The way she protects Lily shows exactly the kind of relationship I enjoy seeing between siblings. Forget the rivalry. Give me loyalty and protectiveness any day. The banter between Rose and Connor is just an added bonus. Man, I love them. The couplings in this entire series are just perfect. I adore them all in their own way.

So, yes, I loved Ricochet. While I regret waiting so long to read it, I’m glad I did it now. I’m also glad I chose to read the audiobook. I LOVE Erin Mallon. She’s a perfect Lily. Moreover, she does such a great job voicing the other characters in the series. She makes me actually hear the characters and feel the feels. She’s everything I want in an audiobook narrator. I can’t wait for Charles Karr to join her in Addicted for Now. I need to hear Lo! (Have I mentioned I love audiobooks?)