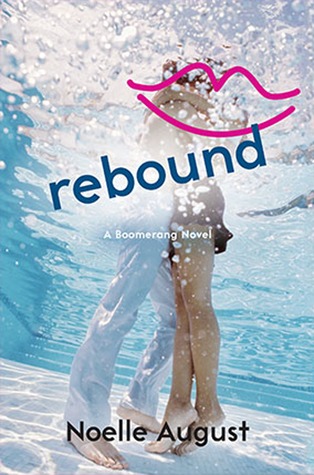 Hooking up is only the beginning of the fun in this sexy and irresistible second installment of the thrilling New Adult series, Boomerang.

Adam Blackwood has it all. At twenty-two, he’s fabulously wealthy, Ryan Gosling-hot and at the top of the heap in the business world. His life is perfect, until a scandal from his past resurfaces and knocks the tech wunderkind down, throwing his company, Boomerang, a hook-up site for millennials, into chaos.

Three years ago, Adam married his high school love—and then lost her in a tragic accident. Now, the heartbreak and guilt he’s tried to bury with work and women begins to take over his life.

Alison Quick, the twenty-one-year-old daughter of a business tycoon—and the very ex-girlfriend of Boomerang’s former intern, Ethan—has a problem of her own. She’s got one chance to prove to her father that she deserves a place in his empire by grabbing control of Boomerang and taking Adam down.

But as Alison moves in on him, armed with a cadre of lawyers and accountants, she discovers there’s much more to Adam and Boomerang than meets the eye. Will earning her father’s approval come at the price of losing her first real love? It appears so, unless Adam can forgive her for wrecking his life and trying to steal his livelihood. But Alison hopes that old adage is right. Maybe love can conquer all.

Last year, I fell in love with Boomerang. The writing was fresh. It was sexy and I adored the characters. I was thrilled to see this series continue and, while Rebound didn’t quite grab me the way Boomerang did, it was still a fun book.

Rebound is the story of Adam and Alison. We met both of these characters in Boomerang. I was excited to get Adam’s story. I had some reservations about Alison, because I only knew her as the girl who cheated on Ethan. But still, I jumped right into this book. I hoped she could be redeemed… and I wanted to see her interact with Baby Ryan Gosling.

I did like Adam and Alison together quite a bit. The setup was similar to the first book in that they met, clicked and then learned they couldn’t pursue a relationship because of something work-related. Here it was that Alison and her family were potential investors in his ventures. But they had an ulterior motive, too. If I’m honest, I didn’t love this. Alison’s dad was seriously shady and she was along for the ride, totally as his puppet. Adam worked hard to get where he was and I didn’t like to see him manipulated. It was a good setup for the book, but it didn’t do much to endear Alison to me. Until she started to see what kind of man her father was and she grew a spine, that is. While this storyline frustrated me, I liked how it was all resolved.

These characters might have been flawed, but they worked so well together. I liked how they challenged each other. It was because of their connection that they each found a way to embrace things that happened in their separate pasts and find a way to move forward. I enjoyed their chemistry and banter. This book gave good slow burn, but I found myself wanting more schemxy times.

Rebound was a good follow-up to Boomerang. I assume this series will continue and I will definitely be interested to see who gets the next book.

Noelle August is an anagram for Veronica Rossi and Lorin Oberweger. Just kidding, it's a pen name!

Veronica Rossi is the author of the New York Times Best-selling Under the Never Sky trilogy for young adults. The books are available in more than thirty countries and the film rights have been optioned by Warner Bros.

Veronica completed undergraduate studies at UCLA and lives in Northern California with her husband and two sons. She is fond of dresses with pockets, fluffy dogs, and cheese and chocolate -- but not together.

Lorin Oberweger began her storytelling career by captivating her first-grade class with tales of her summers on a kibbutz in Israel.

Lorin had never been to Israel.

While teacher/parent night put an end to her first experiments in fiction, she’d already caught the bug and eventually made a career of all things story.

As a long-time independent editor and story development guru, Lorin's client successes range from small press publications to major bestselling novels. She's an award-winning author and has also worked behind the scenes as a ghostwriter on a variety of projects. Her work has received starred Kirkus reviews and glowing mentions in The New York Times.

Oh, she did get to see a kibbutz, eventually, and found out she had it pretty much right all along.

Veronica and Lorin met at a writing workshop and just knew they were destined to create awesome things together.

5 responses to “In Review: Rebound (Boomerang #2) by Noelle August”