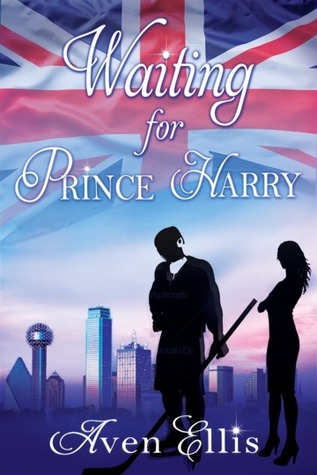 Waiting for Prince Harry by Aven Ellis
Genres: Contemporary, New Adult, Romance
Publication date: April 1, 2014
Publisher: Self-Published
Format: eBook, 249 pages
How I got it: I bought it!
Add it: Goodreads
Buy it: Amazon
My rating:

Twenty-four-year-old Kylie Reed has always been a rule follower. Organized and cautious to a fault, her dreams for life are often filed away for future use—when she has a house, when she meets her future husband, when she has been at her visual display job at a chic Dallas boutique longer...Kylie always has a reason for living her life in the future, not in the present, and not living her life to the fullest and reaching her dream of becoming a fashion designer.

The only exception to rules, of course, would be running away with Prince Harry—Kylie’s ideal man. A hot, fun ginger boy would be worth breaking all the rules for, of course. And Kylie is sure Harry just needs the right, centering woman to settle him down. But living in Dallas and not knowing Prince Harry make this a non-option.

Because when Kylie accidentally falls into the lap of a gorgeous ginger boy—yes, even more gorgeous than the real Prince Harry—all bets are off. Could this stranger be the one to show Kylie how to take a chance, to face her fears, and live in the present? And could this stranger be the Prince Harry she has been waiting for? Kylie’s life takes some unexpected twists and turns thanks to this chance encounter, and she knows her life will never be the same because of it...

I really don’t like to use the term “cute” to describe a book because I fear it might be taken as belittling the author, even if that’s not how I meant it. So, instead, I’ll say Waiting for Prince Harry was absolutely charming and exactly the type of book I needed when I read it. After reading several intense books, I was looking for something light and fluffy that would make me smile. I wanted a happily ever after in which no one was sick or dealing with a relative with an illness. (Might sound strange to need that in a book, but let’s just say life has been heavy lately and I needed to escape into a book without having to worry about it triggering an extreme emotional response.) I spent some time on Goodreads and, when I came across my friend’s glowing review for Waiting for Prince Harry, I knew it was the perfect time to read it. I was right.

I absolutely adored the characters in this book. Kylie was a regular girl and I found her totally likable. I loved how each chapter began with a magazine quiz style question. I used to be such a sucker for those when I was younger. (Of course, if I read more magazines now, I suspect I still would be, if I’m being perfectly honest.) Kylie was charming and awkward and it was easy to root for her as she grew throughout this story. She was admittedly a little too doormat-esque for me in the beginning. I like it when my heroines are more assertive. She got there by the end.

Harrison was so freaking swoony I don’t have words adequate to subscribe him. I was hooked with the words ginger hockey player. (I have a bit of a thing for hockey players these days. And gingers.) My favorite part about him was that he wasn’t the stereotypical conceited athlete. He wasn’t perfect – truth is, he was a bit moody and there were times I wanted to shake some sense into him – but those imperfections made him more realistic and made me love him even more.

The meet cute between Kylie and Harrison was so charming and perfect for their awkward selves. I liked the pace at which their relationship developed. The problems they faced seemed realistic of what would happen when a “regular person” dated a famous one. Their road wasn’t completely smooth, but it also wasn’t angsty and overly dramatic. They balanced each other well and helped each other grow. I loved their chemistry and their banter and, really, everything about them together.

It’s no secret I like my romances on the steamy side at times. While Waiting for Prince Harry wasn’t overtly sexual, it gave good slow burn. Kylie and Harrison have a ton of chemistry and it leaps off the pages. Their love scenes were sweet and swoony instead of smoking hot and it was absolutely perfect for these characters and their story.

This is my first Aven Ellis book, but it definitely won’t be my last. Next time I’m in the mood for a sweet, light romance, I know exactly who to turn to.

Aven Ellis has been writing fiction since she was sixteen. She studied communications at a large Midwestern university, and after graduation, Aven worked as a reporter for a community newspaper, followed by a stint at a public relations agency.

But writing about city council meetings and restaurant franchises was not as much fun as writing for young women trying to figure out their careers and potential boyfriends. So Aven got herself a job in television that allowed her to write at night. Connectivity is Aven’s debut novel; Waiting For Prince Harry and Chronicles of a Lincoln Park Fashionista (New Adult romantic comedy) will be published next year.

Aven lives in Dallas with her family. When she is not writing, Aven enjoys shopping, cooking, connecting with friends on social media, and watching any show that features Gordon Ramsay.

2 responses to “In Review: Waiting for Prince Harry by Aven Ellis”