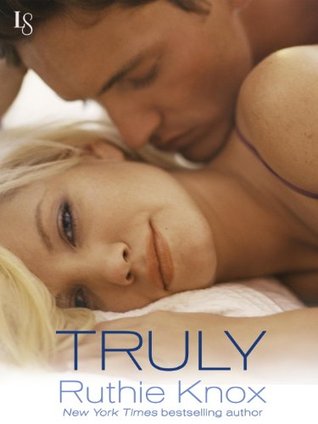 May Fredericks hates New York. Which is fair enough, since New York seems to hate her back. After relocating to Manhattan from the Midwest to be with her long-distance boyfriend, NFL quarterback Thor Einarsson, May receives the world’s worst marriage proposal, stabs the jerk with a shrimp fork, and storms off alone—only to get mugged. Now she’s got no phone, no cash, and no friends. How’s a nice girl supposed to get back to safe, sensible Wisconsin?

Frankly, Ben Hausman couldn’t care less. Sure, it’s not every day he meets a genuine, down-to-earth woman like May—especially in a dive in the Village—but he’s recovering from an ugly divorce that cost him his restaurant. He wants to be left alone to start over and become a better man. Then again, playing the white knight to May’s sexy damsel in distress would be an excellent place to start—if only he can give her one very good reason to love New York.

Oh I loved this book so hard. This is my first time reading a Ruthie Knox book, though I’ve loved her new adult work under the name Robin York. This book had the same feels, humor and heart that Robin’s Deeper series, but with characters facing different types of problems than those in new adult.

I adored May and saw a lot of myself in her. Her chapters were my favorite in the book. She was a strong character with great inner dialogue. She was funny and not exactly naive… but not exactly worldly either. She was a sweet lady who felt like New York was chewing her up and spitting her out. She’s having a really bad day. After ending her relationship with her very public football player boyfriend in a very public (and painful!) way, her purse is stolen and she seeks refuge in a Packers bar. It’s here she meets Ben.

Ben might not have been ideal leading man material at the beginning of the book, but damned if he didn’t make me swoon. Sure, he was grumpy and quick to anger, but there was a good guy lurking beneath his surly exterior. Ben has some baggage that’s left him more than a little jaded, but I just found it all endearing. Once he grew on me anyhow.

It definitely isn’t a case of love at first sight (or even lust at first sight) when May and Ben meet. Ben’s pretty closed off and May is still outgoing and a little awkward. Obviously the banter between them was gold. He rescues her when she needed help most and gives her a place to stay. It’s there their unlikely friendship begins… along with a great slow burn. Oh, and when jaded Ben starts shows May around New York, to try to get her to fall in love with the city? I melted. I think that’s when I fell for him. The road trip when he took her back to her family? When he saw her in ways her family didn’t? That sealed the deal.

I loved so many things about this book. I suspected I’d love Ruthie’s writing because I’ve enjoyed it so much in the books she writes as Robin York. She has this gorgeous, honest way of writing that hits all my feels. I love her characters, even when they’re terribly flawed. In fact, I think I love them *because* they’re flawed. I enjoyed watching May and Ben go from strangers to acquaintances to friends and then more. They sparked in the beginning. It just took them both a little time to realize it, but I enjoyed reading along as they figured it out.

Truly really was the perfect contemporary romance. I was hopelessly hooked on it from the very start. I can’t wait for May’s sister Allie’s story in Madly. She definitely caught my attention in Truly and I’m excited to see where life takes her.

USA Today bestselling author Ruthie Knox writes contemporary romance that’s sexy, witty, and angsty—sometimes all three at once. Her debut novel, Ride with Me, is probably the only existing cross-country bicycling love story. She followed it up with About Last Night, a London-set romance whose hero has the unlikely name of Neville, and then Room at the Inn, a Christmas novella—both of which were finalists for the Romance Writers of America’s RITA Award. Her four-book series about the Clark family of Camelot, Ohio, has won accolades for its fresh, funny portrayal of small-town Midwestern life. Ruthie also writes New Adult romance as Robin York. She moonlights as a mother, Tweets incessantly, and bakes a mean focaccia. She’d love to hear from you, so feel free to drop her a line