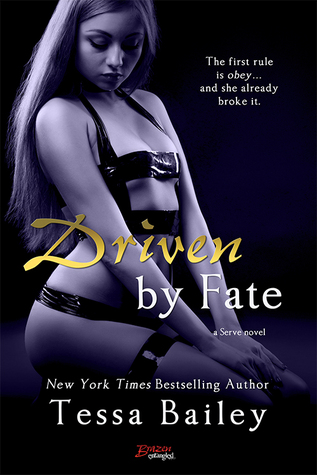 The first rule is obey... and she already broke it.

Francesca "Frankie" De Luca always pays her debts. Even when it means stepping inside Serve, the sensuous Manhattan club that caters to particular adult desires. For Frankie, it's a taste of something she's always wanted—and never received. Until a sharply dressed Brit orders her into his room, and instructs her to undress before delivering the carnal punishment she so desperately needs...

She wasn't the woman Porter Evans was expecting. Not this wild thing with the pale, silvery eyes. And such cheek. But she violates Porter's strict rules of control. Temptation is a dangerous thing indeed. Yet everything about Frankie cries out for schooling about the tantalizing interplay of pleasure and pain. So Porter offers Frankie a deal she can't refuse—and the only thing she owes him is submission...

It’s official. Tessa Bailey has ruined me for all books forever. Driven by Fate was everything. I’ve been walking around in a daze since I finished it, unable to focus on any other book because I can’t get Porter, Frankie and their story out of my mind.

At first glance, this pairing of taxi driver Frankie and businessman Porter might seem odd. But, my god, it was nothing short of perfect when it was all said and done. When they first met at Serve, I knew we were in for something special. The sexual chemistry between these two leapt from the pages. Fiery Frankie and stuffy but sexy as sin Porter were everything. Porter helped Frankie open up and embrace her sexuality. Frankie helped Porter see that sometimes it’s good to break the rules and deviate from the plan. I loved how they discovered each other, together.

I’ve loved each of Tessa’s heroines, but Frankie just might have made her way to the top of my list. I can honestly say she’s the first taxi driver I’ve ever read about. I loved that. She was strong and sassy, determined to make her own way in the world. She was kind and thoughtful. I loved her relationship with her uncle and his friends and her pride in her work. She had big dreams and big ideas and she wasn’t going to give them up.

Porter blew my mind. We’re introduced to him earlier in the Serve series, but I had no idea he would be this incredible. He’s one seriously complex man, but those complexities are what make him such a special character. An alpha male through and through, he likes his plans and rules. With Frankie, however, he begins to loosen up a bit. He becomes warmer and expresses more feelings. Now, he does still have some jerk moments that I feared would wreck my heart, but in the end, he was nothing short of amazing.

Driven by Fate isn’t for the faint of heart. If you’ve read Tessa’s books before, you know how unique her sexy scenes can be. She takes it to a whole other level with Porter and Frankie. My jaw hit the floor during several scenes. Not only does Porter like asserting control, he’s got a dirty, dirty mouth. And I freaking love it. I was buddy-reading this with a friend and we had quite the active conversation going on during this one. You’ll want a fan and a glass of wine with this book. And maybe ice cream. These two are on fire.

This is Tessa’s hottest book to date, but it’s so much more than simply that. Yes, Frankie and Porter are adventurous and combustible while together. But, these two can deliver the feels too! Holy emotions. I loved everything about this book. It was a wild ride that I enjoyed every moment of – even when wanting to shake sense into Porter. I could (and have) gush endlessly about this book. No review can do it justice. You just need to read it and fall in love with Porter and Frankie. Then we can squee together. Books like this are why I read.