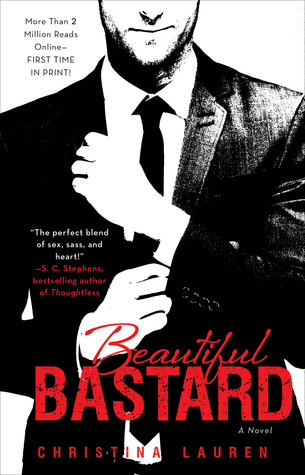 Whip-smart, hardworking, and on her way to an MBA, Chloe Mills has only one problem: her boss, Bennett Ryan. He’s exacting, blunt, inconsiderate—and completely irresistible. A Beautiful Bastard.

Bennett has returned to Chicago from France to take a vital role in his family’s massive media business. He never expected that the assistant who’d been helping him from abroad was the gorgeous, innocently provocative—completely infuriating—creature he now has to see every day. Despite the rumors, he’s never been one for a workplace hookup. But Chloe’s so tempting he’s willing to bend the rules—or outright smash them—if it means he can have her. All over the office

As their appetites for one another increase to a breaking point, Bennett and Chloe must decide exactly what they’re willing to lose in order to win each other.

Confession: I tried a couple years ago to read Beautiful Bastard but I couldn’t get into it at all. Sure, the sex was hot, but I needed more from Chloe and Bennett. The antagonistic connection did not work for me.

That was then and this is now. Maybe I’m more open-minded when it comes to the books I read. Maybe it’s just my mood at this moment. But, I thoroughly enjoyed this story. Yes, I wanted Chloe to grow a backbone. Yes, I wanted Bennett to prove he was a good guy with a heart, underneath his icy, asshole exterior. But, I found myself enamored with the story. Their chemistry. Their denial that they wanted more from each other than just sex. How obvious it was that they were trying to kid themselves. So much yes.

You might have guessed this from my comments above, but it wasn’t always easy to like these characters. They’re both flawed. They both did things wrong. But, for some reason, it worked for me. Chloe was young, but not necessarily naive. She begins working for Bennett as an intern and, despite the closeness she has with the other members of the Ryan family, he seems to hate her on sight. From the beginning, he was a bastard. Let’s just say he earned the nickname Beautiful Bastard. But through all that, they maintained a decent, if not healthy, working relationship. Then, one day, it snaps. The tension they’ve been feeling explodes and seriously HOT hate sex ensues. There’s no doubt these two have chemistry. They also have a problem – he’s her boss and she doesn’t want this to impact her developing career.

The push and pull between Chloe and Bennett was intense. One minute they hate each other and the next, clothes are flying and they’re expressing their rage in other ways. I can’t say I loved them together. I think in some ways, they brought out the worst in each other… but, in others? They brought out the best. I might have been hooked on the story from the beginning, but it wasn’t until nearly the end that I found myself wanting these two to work out their issues… in a manner other than physical. It took some time, but there was great character development from both of them. Bennett more than Chloe, I think, but he’s the one who needed it more.

I’m glad I gave this book another shot. The audiobook was excellent. The narrator perfectly voiced Chloe and Bennett. I’ve already bought the second book on audiobook and will be starting it on my commute tomorrow morning. I’ve been told this series just keeps getting better. I can’t wait to find out.