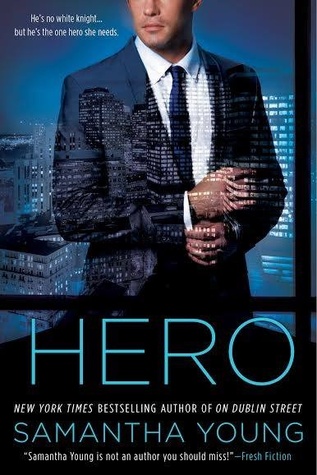 Hero by Samantha Young
Genres: Adult, Contemporary, Romance
Publication date: February 3, 2014
Publisher: NAL
Format: Paperback, 416 pages
How I got it: From the publisher
Add it: Goodreads
Buy it: Amazon | Barnes & Noble
My rating:

Alexa Holland’s father was her hero—until her shocking discovery that she and her mother weren't his only family. Ever since, Alexa has worked to turn her life in a different direction and forge her own identity outside of his terrible secrets. But when she meets a man who’s as damaged by her father’s mistakes as she is, Alexa must help him.

Caine Carraway wants nothing to do with Alexa’s efforts at redemption, but it’s not so easy to push her away. Determined to make her hate him, he brings her to the edge of her patience and waits for her to walk away. But his actions only draw them together and, despite the odds, they begin an intense and explosive affair.

Only Caine knows he can never be the white knight that Alexa has always longed for. And when they're on the precipice of danger, he finds he’ll do anything to protect either one of them from being hurt again…

I’m relatively new to Samantha’s books, having only started reading her mid last year. Since that time I’ve devoured all the books in her On Dublin Street series (and am anxiously awaiting the final book). When I learned she was writing a standalone, I knew I had to read it. I suspected I would enjoy it. I just didn’t realize how much.

Hero is one of those books that grabbed me from the very first few pages. I was pulled into Alexa’s attempts to handle the truth about her father and make things right with Caine Carraway. Of course, her efforts do little but anger him and she’s the one who pays the consequences, losing her job and the prospect of finding a new job in her field anytime soon. She’s unwilling to let things rest, despite Caine’s wishes, and in a surprising turn of events, she winds up working for him. And my goodness is it fun to watch them interact in the early days of her job. Caine Carraway is a hell of a lot hotter than Miranda Priestley (a la Devil Wears Prada), but he seems to have taken some lessons from her. He’s demanding and difficult, but he’s sexy and Alexa can’t seem to shake her attraction to him. Forbidden sexy times with the boss aren’t exactly new in literature, but Alexa and Caine own it. This is the best I’ve ever read in this trope.

I really liked Alexa. She was strong and determined. She wasn’t living an easy life, with her father’s lies and her family basically shunning her. She was impulsive, which is what led her into the situation she found herself in with Caine. But, she really did think she was doing the right thing, trying to apologize for what happened between her dad and his mom years ago.

Caine was a tough man to like. I know he was struggling with his attraction to Alexa and everything that meant, but I wanted to strangle him for the way he spoke to her (and of her) at times. I don’t think he ever *meant* to hurt her, but he did. He was definitely a complex man with a complicated (and unexpected) past. He’s the kind of character you never expect to land on your swoony book boyfriend list, but sneaks in and takes you by surprise. I was definitely singing his praises by the end of the book.

The dynamic between Alexa and Caine was interesting. Of course, it was incredibly antagonistic in the beginning of the book. What I loved most was watching them open up and their connection evolve. It might have started as something purely physical – a sort of explosion to help them work out all the tension between them – but there was so much more to these two. There was something real there. They just both had to be open to the possibility.

Books with characters like this – who are unwilling to see what’s right in front of them – need strong secondary characters to help guide the main characters. The big standout for me in this book is Caine’s neighbor, Effie Flanagan. Oh, how I loved this nosy woman. Her presence helped humanize Caine and show Alexa just how much more there was to him than what met the eye. She also helped Caine realize how special Alexa was and encouraged him (on the sly, of course) to let down his walls and let Alexa in. Caine’s coworker Henry also did his part to help these two find their way. Of course, he took a slightly different path, but it was no less effective. Jealousy will spur a man like Caine into action any day. Hero would’ve looked a lot different without both of these characters.

I was so hooked on all the things about this book. The characters, their dynamics, the sexy times – I couldn’t walk away. When you decide to read Hero (and it’s soon, I hope), clear out a good block of time. You’ll want to read it cover to cover in one sitting. I found myself forgoing sleep to finish this book. I regret nothing. Not only does Samantha Young bring the sexy, she brought ALL the feels and some twists and revelations that blew my mind. And kept me on the edge of my seat, waiting to see what would happen next.

Oh, and that epilogue? Brilliant. I ended this book with a giant smile on my face.

2 responses to “In Review: Hero by Samantha Young”