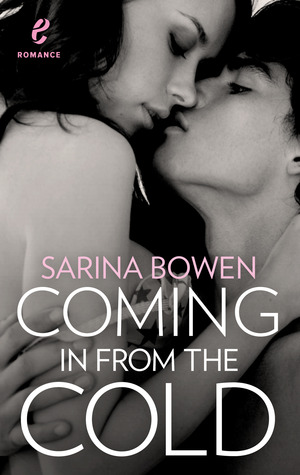 Coming in from the Cold by Sarina Bowen
Series: Gravity #1
Genres: Adult, Contemporary, Romance
Publication date: May 1, 2014
Publisher: Harlequin E
Format: eBook, 190 pages
How I got it: I bought it!
Add it: Goodreads
Buy it: Amazon
My rating:

Alpine ski champion Dane “Danger” Hollister does not do relationships, though he has an excellent reason. No woman would ever say “I do” to a guy whose faulty DNA will eventually cost him everything: his spot on the US Ski team, his endorsements, and the ability to fly downhill at 90mph.

While Willow Reade moved to rural Vermont to get back to the land, that wasn’t meant to include a night stranded in her vehicle during a blizzard. Luckily, the hot ski racer she practically ran off the road has granola bars and a sleeping bag, and is happy to share. Maybe it’s the close quarters, maybe it’s the snow, but soon the two are sharing a lot more than conversation.

Yet neither can guess how their spontaneous passion will uncork Dane’s ugly secret and Willow’s tentative peace with her own choices. Only their mutual trust and bravery can end the pain and give Willow and Dane a shot at hard won happiness.

Can I tell you all just how much I love Sarina’s cold weather sports men? The guys in the Ivy Years series are incredible, so I had pretty high hopes for Dane. Despite some dickish moments, I found myself in love with him well before the end of this book.

I love when books put two characters together in a situation they can’t escape from – be it something simple like seatmates on a bus or plane or something more complicated like with Willow and Dane in this book. I like to watch the bonds that form when two characters have some type of forced interaction for a long period of time. It’s fascinating to me. There was undoubtedly a spark between Willow and Dane. It could be the start of something lovely, but while Dane is happy keeping each other warm, ahem, it can’t go past one night. He doesn’t do relationships. Willow’s ok with this, in theory. But, their “one night” of passion is just the beginning for this couple. Some connections you just can’t shake.

I really liked Willow. She was a good, strong heroine. She’d had her heart broken before, but she didn’t let that get her down. She was intelligent and driven. After the unexpected happens with Dane, she shows her true strength. I admired her. It wasn’t an easy situation and his reactions hurt. But she was strong enough and mature enough to realize she could do whatever she needed to on her own. Dane be damned.

Dane was struggling with his demons. That much was clear from the very beginning. It was because of those demons (and the way he pushed people away) that made it a little difficult for me to connect with him. He was hot-tempered and really quite mean to Willow at times. I understood WHY he was like he was and I felt sorry for what he was struggling with, but he didn’t make it any easier on himself by pushing everyone away. His character growth throughout the book was great, however. When the full reality of his situation became clear and he became the man he was trying to hide away for so very long, that’s when I came to fully crush on him. There was a great man behind all those walls he put up. It just took him awhile to appear.

Coming in from the Cold definitely hit on some heavy subjects, but did it without ever becoming too angsty. Without getting spoilery, I just have to say how much I appreciated the realistic level at which issues were faced in this book. There were emotional moments – and I might have shed a tear or two – but they weren’t overwhelming. These moments were nicely balanced with some sexy times and even a few humorous scenes. It was easy to get wrapped up in the lives of these characters and their friends. Dane’s coach and Willow’s best friend Callie were great characters I can’t wait to see more from in the future. The next book in the series, Falling from the Sky, is Callie’s book and I can’t wait for this fantastic lady to get her own story.

Note: Unfortunately this title isn’t available for purchase right now. Harlequin scrapped their Harlequin-e line, but Sarina will be publishing again soon. 🙂 You just might find out more about that in just a few days, right on this blog. Stay tuned…

Tags: 4 Star Review, Coming in from the Cold, Gravity, In Review, Sarina Bowen