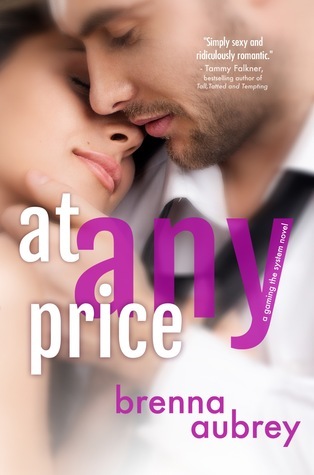 When Mia Strong, proud geek-girl and popular gaming blogger, auctions off her virginity online, she knows she'll make waves. But what she will not be making is a love connection. Her rules are set in stone: One night. No further contact.

It's a desperate step, but it's the only way she can go to medical school and pay her mother's mounting hospital bills.

Adam Drake, the enigmatic auction winner, is a software prodigy who made his first million at seventeen. Now, in his mid-twenties, he's sexy, driven and--as CEO of his own gaming company--he's used to making the rules. Before Mia knows what's happening, he's found the loophole in the rules of her auction. Every stipulation she's made to protect her heart gets tossed by the wayside.

My experience with this book just goes to show I’m a moody reader. I tried to get into it early in 2014, but couldn’t. Recently, I was in the mood for a book with a sexy nerd and decided to give it another shot. (Take note, authors. There’s a need for books featuring hot nerdy guys. Seriously. I was shocked at the response on Twitter when I brought it up that day.) Adam might not have been *exactly* the kind of nerd I was looking for, but I fell in love with him, Mia and their story and began to binge-read the rest of the series.

This isn’t the first book I’ve seen out there with the virgin heroine who offers her virginity up for sale. It is, however, the first one I’ve actually read. What might have been off-putting at first made more sense once all the nitty gritty behind Mia’s decision became clear. While it’s definitely an unconventional way of securing the funds to pay off bills, I can’t fault the girl for using her … assets.

I liked Mia from the beginning. She was strong and determined and, while I’ve never really been a gamer, I was able to connect with her nerdery on other levels. I loved how determined she was. She wasn’t the simpering heroine you might run across in books with this storyline. Adam, however, took some time to grow on me. If I’m being honest, I’m a little over the whole young playboy millionaire. I did, however, like the added geekiness he had. He was smart, rich and pretty sweet, underneath that cold exterior.

While Mia and Adam’s first meeting wasn’t exactly cordial, there was definitely an undeniable chemistry between them. I loved how that was explored and the pace at which everything developed between them. There was more to each of them than met the eye and I thought they were good for each other. That’s not to say I didn’t feel like strangling them a couple times throughout the book.

This was definitely an enjoyable book. It was a quick read and one I easily lost myself in. Despite their unorthodox start, I found it easy to root for Adam and Mia. I was quite pleased with how everything wrapped up at the end and have some concerns about where their story will go in the following books in the series. It’ll be interesting to see how the author keeps their story from growing stale over the course of two additional books. I sense some serious drama ahead…

Brenna Aubrey is an author of New Adult contemporary romance stories that center on geek culture. Her debut novel, At Any Price, released December, 2013.

She has always sought comfort in good books and the long, involved stories she weaves in her head. Brenna is a city girl with a nature-lover’s heart. She therefore finds herself out in green open spaces any chance she can get. A mommy to two little kids and teacher to many more older kids, she juggles schedules to find time to pursue her love of storycrafting.

She currently resides on the west coast with her husband, two children, two adorable golden retriever pups, two birds and some fish.

Tags: 4 Star Review, At Any Price, Brenna Aubrey, Gaming the System, In Review

3 responses to “In Review: At Any Price (Gaming the System #1) by Brenna Aubrey”