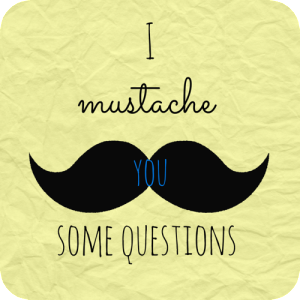 I was tagged by Jessica @ Lovin’ Los los libros

Four names people call me other than my real name:

Four movies I would/have watched more than once:

Four? Seriously? This is tough…

Four places I have lived:

Four places I have been:

Four of my favorite foods:

Four TV shows that I watch:

Tags: I Mustache You Some Questions, Just for Fun, survey

2 responses to “I Mustache You Some Questions!”