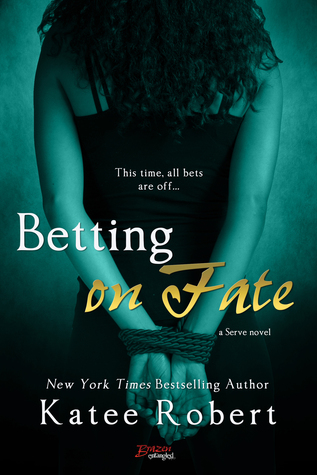 This time, all bets are off...

Penelope Carson loves to steal clients from Will Reaver. Yet something in her business nemesis's icy blue eyes makes Penelope...nervous. It certainly doesn't help that the man is the living embodiment of a Norse god. A controlled, powerful Norse god. Which she really should have remembered before she made a bet with him—because losing means becoming Will's personal submissive for a week. There's nothing Will would like more than to have Penelope kneeling before him in complicit submission, her fiery dark eyes inviting him in. Challenging him. But their bet takes Will and Penelope deeper than either of them have ever been. Where control is an illusion, and boundaries are pushed aside. And where hearts become the stakes in a game that neither Dominant nor submissive can win...

Floggers and spreaders and threesomes, oh my!

Ooooh boy. Katee Robert upped the heat factor on the Serve series with Betting on Fate. It takes a lot to shock me or make me blush when I read, but this one got me. I was all but fanning myself while sitting in my parents’ living room reading it. It definitely pushed the limits and I enjoyed it.

There was one thing I didn’t really enjoy about this book. Unfortunately, it was Will. He was ok as far as book boyfriends went, but there was always a level of coldness to him that made it difficult for me to like him. In so many of the other BDSM books I’ve read, there was always a certain level of warmth to the man, if not during the scene, immediately afterwards. I didn’t find that with Will until it was almost too late. I know he was fighting his feelings and trying to maintain control, but it made it difficult to connect with him.

Both Tessa Bailey and Katee Robert are Serving up some heat with this series. As much as I’m not ready to see it end, I am anxious to get to Tessa’s next book, Driven by Fate. I’ve seen some teasers and it’s gonna be oh-so-very hot.