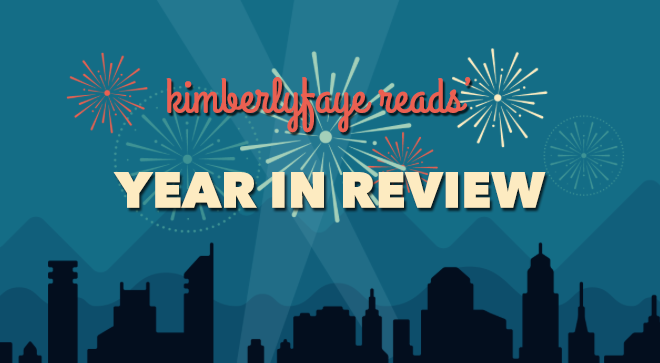 You guys, it’s been one hell of a year and I feel like I need to do it justice with some sort of wrap-up post, but every time I sit down to try to think about it, I get totally overwhelmed. But I’m gonna make this happen… even if I don’t get it posted until mid-January!

Let’s start off with…

WordPress gives us this seriously cool annual report that I am pretty much obsessed with. It’s not because of the numbers, because really, what do they mean? It’s full of what my real-word boss likes to call “imaginary internet points” like page views and such. What I really love about it is how pretty it is and how well it summarizes everything from most popular posts (which were somewhat surprising) to top referrers (which really weren’t terribly shocking) to my top commenters (thanks, y’all!). Thanks, WordPress. I’ve totally enjoyed looking at my annual report. (And yep, I totally snagged my header graphic from that annual report because, well, I liked it.)

Um, I read a lot this past year. It was my escape from stress. (Can you tell it’s been a stressful year?) I feel almost like I have to defend the number of books I read. LOL. I’m a fast reader. I listen to audiobooks during my commute and while at work. And, well, I read a lot of novellas. So… Here are some handy-dandy Goodreads screenshots to break it all down.

(Also, I think my DNFs were counted as read, so that inflated my number, too.) Regardless, I still read a damn lot of books.

(The zero-star books are all DNFs.)

The best of the best…

I had the pleasure of co-hosting a great end of year meme with Krista from Krista’s Dust Jacket and Jess from A Midsummer Night’s Read. This makes it super easy to break down my favorites in a whole bunch of categories!

So, I was a bit overzealous at the end of 2013, my first year of blogging, when I decided to sign up for FOUR challenges for 2014. I thought it would be cute to do them and have an update post every month. Sometime in September when all the things in my real life exploded, I gave up on all that. The good news is, I’d already more than reached my goal. So, while these numbers don’t include ALL the books read in a given category in 2014, at least I can say I met my goals. (Even if I didn’t follow through.)

As of the end of August, I read 136 books written by indie authors. My goal was 75 or more. So, yeah… challenge complete. (I totally stopped categorizing this one on Goodreads.)

While I might not have linked up my reviews or posted monthly updates after August, I did continue to track my “First Reads” or new-to-me authors. I ended the year with 133 books by new-to-me authors (just one book per new author was counted!), far surpassing my goal of 75 or more.

I loved the 2014 Audiobook Challenge, but somewhere along the way after August, I kinda stopped tracking this one too. My goal was 30 audiobooks for the year and I ended with 31 on my Goodreads shelf. I’m pretty sure I read more than that though. Regardless, challenge met!

This one was super easy peasy. A large portion of the books I read come from NetGalley or Edelweiss, so I knew this one was in the bag from the start. At last count (also at the end of August), I had read 124 books from NG or Edelweiss. My goal was 100. Sooooo… challenge met.

In related news, I will not be signing up for ANY yearlong challenges in 2015. I think I’ll stick to short-term, easily measurable challenges like Bout of Books and the like.

2014 was a pretty awesome year, bookishly and otherwise. I love my job again. I got a promotion (and an office with windows from which I can see the US Capitol!). My former roommate and I were forced to move because our landlord sold the house we had rented for 11 years, which was frustrating, but we both came out of it better off because we each have our own places (and shorter commutes)!

Some of my favorite bookish things from the year include being part of Cora Carmack’s Carmcats street team (even though I had to drop out before ABD was published because of my pending move and all that drama). I’ve met some incredible people through the team (y’all know who you are!) and I’ve definitely missed it a bit since I’ve been gone. In March, I went to a DC author event (which was a blast) and met a new book buddy. Yay! In May, I went to my very first BEA. I learned a lot of lessons, but had a mostly amazing time. (NOT on Saturday. That was a hot mess.) In September, I drove up to Baltimore for the Baltimore Book Festival and had an incredible time. Nothing like having lunch with three of your favorite authors (Tessa Bailey, Megan Erickson and Jen McLaughlin/Diane Alberts) and an awesome blogger (Jen from Jenuine Cupcakes!). I got to see some author and blogger friends and meet some new folks. Totally worth the drive to a city I’m not a huge fan of. November brought a bit of a surprise when I met up with another local blogger and attended NCTE. I had no idea a non-teacher could attend the tradeshow, but I’m glad I know. Holy crap. The books!

The highlight of this entire year has been meeting so many awesome bloggers, authors and publicists. If I start naming names, I’m sure to miss someone and I definitely don’t want to do that. I’ve found “my people” (you know who you are) and can’t imagine my days without them.

I made some bookish resolutions to try to help me keep my sanity and continue to enjoy what I’m doing. I want to keep this a lot more like fun and a lot less like a second job!  February brings Apollycon and I couldn’t be more excited! (I might be more anxious for this than BEA.) Of course I’m excited about the authors and books (and models! <3 Drew) but I’m most excited because I will *finally* get a chance to meet some of my blogging besties face-to-face! I’m going to try to make it to BEA again this year. Despite the drama of the last day, it was totally worth allllllllll that it cost to go. (Hello tax refund!) I also have plans to go to an author event in Cleveland in April and Pittsburgh in September. Who knows what else the year will bring!

And, of course…. I’m looking forward to the books. All of them, really, but here are my top 14 most anticipated titles on my 2015 TBR!

Happy new year, everyone! I hope 2015 brings you awesome things and I hope our paths cross at some point!

Tags: Just for Fun, Year in Review, Yearly Wrap Up