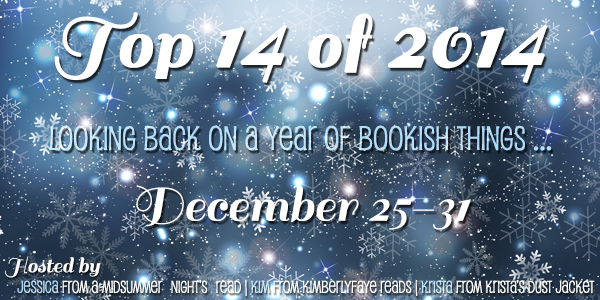 It’s finally time for the Top 14 of 2014! I’m excited to look back over my year in books and share my favorites with you. 🙂 Today’s post is all about our favorite characters of 2014. Holy crap was this tough. I split my list in half and give you the seven most outstanding women and the seven swooniest guys.

Don’t forget, there’s still time to participate in this meme (and enter to win some great prizes from me, Krista from Krista’s Dust Jacket and  Jessica from A Midsummer Night’s Read! Make a post and link it up below. I can’t wait to see your favorites!

I said yesterday when I did my favorite couples post that Ryke is my favorite of all the swoony book boyfriends. And it’s still true today. Not only is he sexy as sin, but he’s a good guy, despite how he might come off to someone who isn’t that intimately acquainted to him. He would do anything for the people he loves.

Giving Ryke a total run for his money in the swooniest of all book boyfriends list this year is Ansel from Sweet Filthy Boy. He’s sweet and dirty, he doesn’t mask his feelings or desires. He wasn’t perfect, but he was damn close. And if I didn’t love him enough, I listened to the audiobook version of his version of the morning after in Vegas and fell that much harder.

I knew I had to include one of Tessa Bailey’s incredible men in this category, but it was so very difficult to decide which one topped my list. Each time I read one of Tessa’s books, I think I’ve found my ultimate sexy as hell book boyfriend… until I read the next book and promptly move him to the top of the list. I decided to go with Bowen for my favorite though. He wasn’t that appealing of a character when he was first introduced in His Risk to Take, but once I started to read from his POV, I was hooked on him. He might have been involved in some seriously questionable dealings, but he’s nothing but heart. I can’t wait to see where life takes him as the Crossing the Line series continues.

Oh, Ridge. What can I say about Ridge that hasn’t been said a million times before? It’s weird to call the guy who ultimately cheated on his girlfriend a swoony book boyfriend, but it’s true. What was going on with he and Sydney was bigger than both of them. I’m not one for cheating books, but I’ll make an exception in this case. Everything from the man he is to the music he writes made me love him.

It took me some time to warm up to the idea of Cole as a romantic lead, but after a couple chapters, I was all about him. It was weird to read about him in super sexy situations after watching him grow up in the earlier books in the series, but once I did? Wow. I don’t like to play favorites in a series, but if I had to pick from all the amazing men in the On Dublin Street series, he would be at the top of the list. He might look like the stereotypical tattooed bad boy on the surface, but he’s so much more.

Josh Mitchell was something truly special, as was I’ll Meet You there. The former player has reformed his ways (mostly) after a stint overseas with the Marines in which he lost his leg. He has to deal with being back in his crappy small town and the hand life has dealt him. He struggled with not only the physical but mental issues his time overseas brought. He had some serious issues, but his imperfections made him the amazing character I fell in love with.

If you told me before reading Make It Right that Max would make it to my favorite characters of 2014 list, I’d have told you that you were insane. The guy was such an arrogant ass in the first book in the series, but he redeemed the hell out of himself when it was time for his book. Oh Max, how I love thee. He bakes. He has a fondness for stray cats. He takes care of the people he loves. There was so much more to him than met the eye.

Next up is Max’s partner in all awesomeness, Lea. Megan’s Bowler University series is full of all kinds of interesting and lovable characters, but Max and Lea were it for me. Lea was strong and determined and independent. She was also funny and sweet. I loved how she didn’t automatically gravitate to the cocky guy. She made him work for it.

I decided I would only allow myself one male and one female character from Krista & Becca Ritchie’s Addicted series/Calloway Sisters spinoff on this list. The guy was a given. It was so difficult to narrow it down to one female though. I just love the characters in this series so much, it’s hard to play favorites at times. Rose was probably the sister I liked the least throughout the first few Addicted books. She came off as a real know-it-all bitch, and honestly, she was smart and bitchy. But there’s more to her than meets the eye, too. Connor is her perfect equal and reading as she gave up control made KtS one of my favorite books of the year and solidified her spot amongst my favorite characters.

A female military character? Sign me up. There are some great heroines in young adult lit, but I’ve never come across one like Sam in realistic fiction. She was strong, driven and determined, but still likable. I admire how she handled the array of shit thrown at her during the course of the book. Now I can only hope for a sequel…

Annie Lucas
Julie Cross’ Whatever Life Throws at You

Annie was likable and believable. A real girl. She wasn’t a prima donna or a total tomboy. She fell somewhere comfortably in the middle for me. I loved the relationship she had with her father. I adored her and Jason Brody together.

After Caroline’s privacy was violated in one of the most malicious ways I’ve read in a book, she didn’t lie low or hide. She fought back and I was proud of her. I enjoyed her personal growth throughout the first book in this series, Deeper, but Harder took it all to another level entirely. She possessed a strength and determination I don’t normally see in a character of her age.

I want to be besties with Imogene. Seriously. She’s my bookish spirit animal. She doesn’t have time for bullshit and isn’t afraid to speak her mind. As off-putting as that might be for some, I find it refreshing. This girl was anything but a doormat.

I originally fell in love with Celeste during Flat-Out Love, so I was obviously thrilled to learn she would get a book of her own. She’s so charming, adorable and quirky. She’s come so far from the girl she was during Flat-Out Love. I loved following her progress as she put herself in uncomfortable situations to grow even further. I just wanted to give her a hug and some encouragement and tell her how proud I was of her.

I can’t wait to visit your posts! Check back tomorrow for our sixth day, the 2015 TBR! 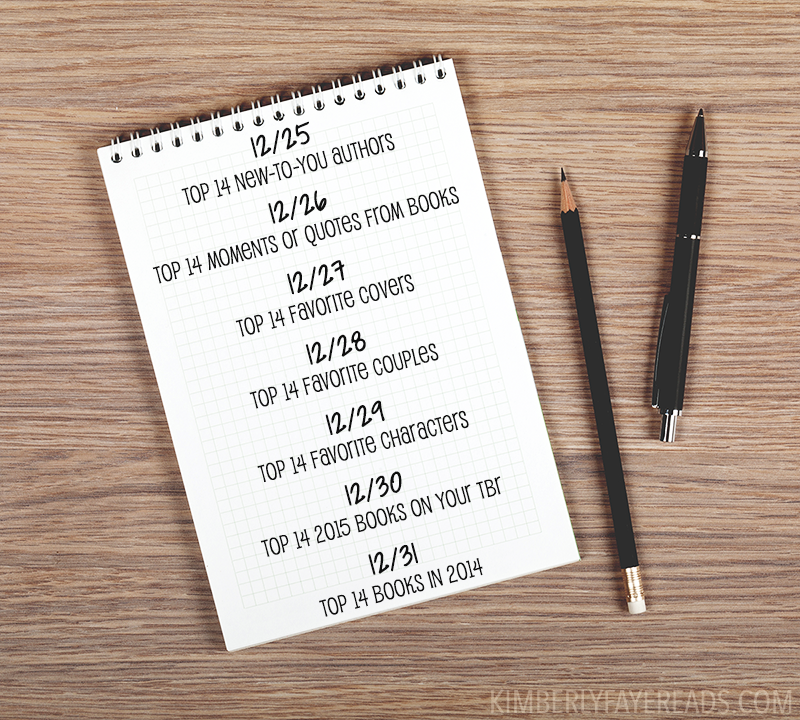