Thanks for joining us as we celebrate the holidays with thirteen New Adult authors. Check out every stop leading up to December 24 to get excerpts, exclusive content, and hopefully a cutie under the mistletoe! Be sure to enter the Rafflecopter to win a grand prize pack of an ebook from each participating author!

Today I’m excited to host Brenda St. John Brown! I love love loved her debut novel, Swimming to Tokyo, and I’m thrilled to be sharing a bonus scene from the book with you today! 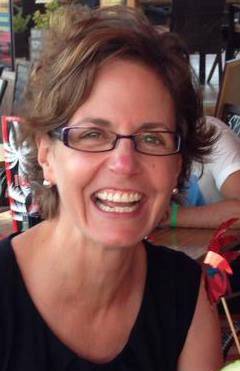 Brenda is a displaced New Yorker living in the English countryside. She writes novels about teens and twenty-somethings kissing. Her characters do other things, too, but there’s always kissing.

When she’s not writing, Brenda enjoys hiking, running and reading. In theory, she also enjoys cooking, but it’s more that she enjoys eating and, try as she might, she can’t live on Doritos alone. 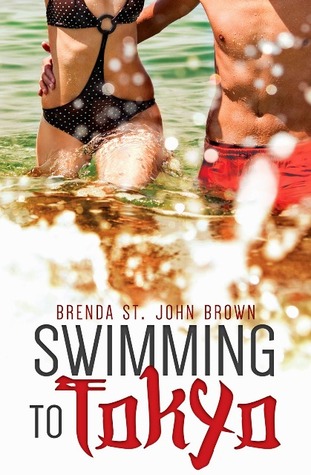 The rules for swimming are simple:

Rule #1: There is no lifeguard on duty.

Since her mom died three years ago, nineteen-year-old Zosia Easton’s been treading water. Living at home. Community college. Same old Saturday nights. So when her father breaks the news he’s taken a job transfer—and by the way, it means renting out the house that’s been her refuge—a summer in Tokyo feels like it just might be a chance to start swimming again.

Finn O’Leary has spent God knows how many years trying to drown out his past. Juvenile detention. Bad decisions. Worse choices. He’s managed to turn it around – MIT, Dean’s List, a sexier-than-thou body with a smile to match – at least on the surface. When his mom asks him to spend the summer with her, Tokyo seems as good a place as any to float through the summer.

Babci’s tiny kitchen is at least eighty degrees, which is why I’m stripping down to a tank top in the middle of mashing the potatoes. Although, truth be told, Finn’s raised eyebrows and appreciative smile as I lift the hem of my sweater are awfully encouraging. So is the way he bites his lip like that. Good Lord. He’s not even doing anything. I just know what usually follows that look…

I turn back to the potatoes and slam the metal masher down with extra force. Babci has an electric mixer, but she says it makes the potatoes too smooth and I learned a long time ago not to argue with her in the kitchen. Especially on Christmas Eve. It’s probably better anyway. Gives me an outlet for this sudden energy zinging through my veins.

“Zosia, you are going to go through the bottom of the pot pounding like that. Gently.” Babci places her gnarled hand on mine and then turns to Finn. Whose expression changes from come hither to oh crap in an instant. “Can you get the plates and the silverware? Three and an extra. Everything’s almost ready.”

A look of relief crosses Finn’s face as he nods and I swallow a smile. This big tough guy is still nervous as hell about spending Christmas with Babci.

You go and I’ll meet up with you on the twenty-seventh.

Blah, blah, blah. Only after I had an honest-to-God, foot-stomping almost-tantrum did he agree to come with me. It’s not like he hasn’t met Babci before and there’s no way I’m letting her spend Christmas on her own. Besides, if I’m honest, I’m just starting to accept Christmas without Mom. With Dad in Tokyo this Christmas, Babci’s the only family I’ve got. If Finn made me choose…

Ok. Ok. I’ll do this because I love you. But you’re going to owe me.

Indeed. Heat flashes across my chest. That was one debt I wouldn’t mind paying again. Twice.

I give the potatoes one last smash and say to Babci, “I think these are good. Do you want me to get the fish out?”

“No, leave it until last. We have the soup first after the oplatek,” Babci says.

She reaches for the cream-colored envelope on the shelf next to the sink. It looks like a business letter, except for the blue Virgin Mary holding baby Jesus stamped on the front. Finn comes back into the kitchen and she hands him the envelope. “Will you put these on the table, too?”

He glances down and then to me. “It’s the wafer I told you about. We break it before the meal,” I say.

“Right. I remember.” He smiles and shakes his head, glancing at Babci. “Zosia tried to teach me how to say Merry Christmas in Polish, but it didn’t really go so well.”

“And an F for execution,” Finn says. “Does Feliz Navidad count? Because I’m good at that one.”

“Wesołych Świąt,” says Babci. Then she shrugs. “But Feliz Navidad is okay. Is not the words that matter, yes?”

She hands me three bowls from the cupboard to dish up the mushroom soup bubbling on the stovetop. We don’t have all twelve traditional Polish dishes for Christmas Eve, but Babci always makes mushroom soup and carp – mushroom soup because I won’t touch red borscht and carp because it’s pretty much the Polish equivalent of turkey at Thanksgiving.

This year she’s also made kielbasa, even though our Christmas Eve meal is usually meatless. Finn adores the kielbasa from the Polish grocery on 68th Avenue, which he loudly declares anytime we’re in Queens. Babci hasn’t said anything about it, but the fact she’s made something special because she knows he loves it speaks volumes.

I carry the bowls of soup into the dining room and carefully set them down. Babci says grace in Polish and then gestures to the empty place Finn set. “We are blessed to be together at Christmas and prepared to welcome strangers and friends to this table to share our many blessings.”

The words are the same ones I’ve been hearing my whole life, but it’s the first time for Finn and he looks almost sad. I can’t help wondering what his childhood Christmases were like. He’s never once mentioned going to Baltimore even though his best friend lives there and his responses to my questions about Christmas in his family have been one-sentence answers, at best.

Not exactly a ringing endorsement for Christmas past.

Babci gives each of us a white oplatek and then holds hers out to Finn. “Wesołych Świąt. Merry Christmas. Feliz Navidad. Thank you for joining us in our celebration.”

He smiles and breaks off a piece, eating it slowly while I break the wafer with Babci. Finn’s turn is next and, in keeping with custom he breaks his wafer first with Babci. “Merry Christmas. Feliz Navidad. Thank you for inviting me here today.”

To me, he says, “Merry Christmas. Feliz Navidad.” His smile softens and he squeezes my thigh underneath the table. “Thank you for inviting me here today. Thank you for every day.”

I feel my eyes well up, but manage to get through breaking my wafer with Babci dry-eyed. When I turn back to Finn, though, my voice cracks as I say, “Wesołych Świąt. Merry Christmas. Feliz Navidad.” I squeeze his hand. “Thank you for being here even though you weren’t sure.”

Finn squeezes my hand back. Hard.

Before he can say anything, Babci clears her throat. Her gaze rests on Finn. “You are welcome here. Christmas. Easter. An odd Tuesday. You need anything, you don’t need anything, you come.” Babci smiles then. “And you bring her sometimes, too, yes?”

We all laugh and Babci raises her glass of red wine. Finn and I do the same, taking turns clinking glasses. Then, one by one we tip a bit of our wine into the glass at the empty place setting. This is part of our family tradition, too – the figurative sharing of our many blessings. Although this year there’s nothing figurative about it. This year, surrounded by two of the people I love most in the world, I feel blessed beyond measure and have more than enough to share.