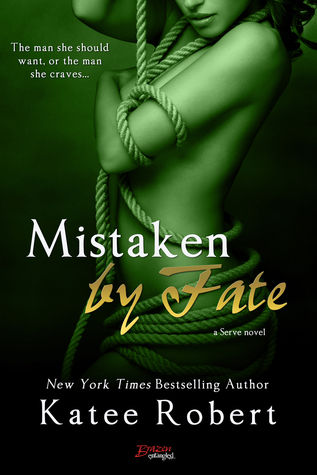 Former soldier Garrett Reaver hasn't ever gotten Ridley out of his system. And now that she's before him in all her submissive glory? He'll be damned before he lets someone else have her, especially his brother. Because Garrett and Ridley have some seriously unfinished business to take care of, and it starts now. And this time, he'll show Ridley how exquisite a relationship with him could be…if their past doesn't catch up to them first.

After falling in love with Tessa Bailey’s Serve series books, Served by Fate and Exposed by Fate, I was excited to learn Katee Roberts was writing books in the series. I’ve enjoyed Katee’s books in the past and I couldn’t wait to see the Serve world through her eyes. Mistaken by Fate was full of sexy bondage fun and I enjoyed it immensely.

I love a good second chance romance story and Mistaken by Fate was that, with a heaping helping of BDSM goodness added in for good measure. Ridley’s an up-and-coming fashion designer who is looking for more passion in her life (and her bedroom). Intrigued by the club Serve, she decides to join and seduce her friend, Will. The night of their first “date,” she has one of the most satisfying experiences of her life, but when it’s all said and done it wasn’t Will, but his twin brother – and the man who broke her heart – Garrett who she gave herself over to.

As much as I enjoyed the fun, dirty times, my favorite part of this book was the journey that Ridley and Garrett took back to each other. I liked watching them overcome their past drama and submit to what was in front of them now. It was obvious they still shared a connection and I was definitely rooting for them. The next book, Betting on Fate, is Will’s book and I can’t wait for it. Will’s tastes run a little darker and I’m ready for a little education of my own.