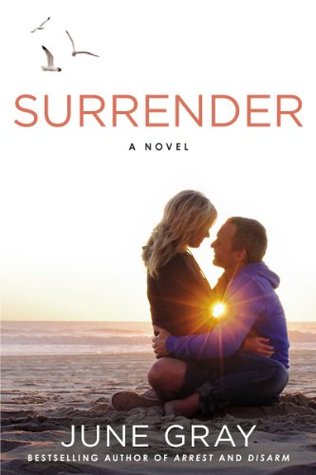 Julie Keaton had everything—she had a new career in a new city and, more importantly, a bright future with fiance, Jason Sherman. That is, until the day she discovered that he had been killed in Afghanistan. In one moment, her life changed, as everything she’d hoped for died along with him.

Years later and Julie still feels the aftershocks of Jason’s death. She is no longer the same adventurous, open girl; now she wears armor around her heart in order to protect the most important thing in her life—her son.

But when Julie meets the mysterious Neal, she starts to feel the smallest flicker of hope, as what began as a fling quickly becomes something more. Neal is the first man since Jason’s death to break down her armor and make her believe again. But when she discovers the secret he’s been keeping, she has to ask herself: can she surrender to a future with Neal or will Jason’s death forever tie her to the past?

After enjoying the previous two books in June Gray’s Disarm series, I was excited to learn it would continue with a chance at a happily ever after for Julie, the woman who was Elodie’s brother Jason’s fiancé when he was killed in action. Her story broke my heart so I really wanted her to find a second chance at love.

Julie was the type of character I connected with immediately, despite really having nothing in common with her. She was a great mom to Will and she did a fantastic job making up for the absence of his father. The relationship between Julie and her son was sweet and touching. They were quite a team. I hated that Jason wasn’t around to be a part of it all. They would’ve made one hell of a family, but life had different plans in mind. Despite the face she puts on for the world, Julie’s still struggling with the loss of Jason. As you would expect. When she meets Neal, there’s an undeniable chemistry, but there’s also a concern about forgetting Jason and what bringing another man around would do to Will.

Neal was a good guy. The fling he and Julie started happened really quickly and their feelings developed sooner than I might have liked, but somehow it still worked for me. I loved the playfulness between the two of them, and even more importantly, I respected the relationship he developed with Will. He was a role model and a father figure, but never tried to replace Jason. He was in it for the long haul with Julie and Will and I really wanted them to make it work. But, as there generally is in life, secrets threatened to destroy what they had built. Choices had to be made and none of them were easy, but Julie and Neal were both strong and determined characters. Life had to knock them around a little just to make sure they were committed.

I expected Surrender to be an emotional book. The first two books in the series were emotional in their own right, as Elsie and Henry fought for their love and against everything that tried to take it from them. But there was something about this one, whether it was just the time at which I read it or the fact that I connected to Julie more than Elsie, that made it even that much MORE emotional for me. Military stories affect me strongly and when I find myself as wrapped up in the characters as I was with this book, I feel every single feel.

Surrender brought everything back full circle. It was sad, at times, as I expected, but mostly it was hopeful. I’m a sucker for a second chance story and this was one of the more beautiful (and, at times downright frustrating) ones I’ve read recently. June Gray’s books aren’t all hearts and flowers, but instead they’re a realistic look at the ups and downs of military life and love. They have a way of punching me in the gut and grabbing my heart. As sad as I am to see this series come to an end, I’m ridiculously pleased with how everything came together.

June Gray is a daydreamer who, at the age of ten, penned a short story inspired by a Judy Blume novel and has been unable to stop writing since. She loves to tell stories that titillate and enrage, that break the reader’s heart and put it back together again.

Her fairy-tale life has been lived on four different continents—most recently, in a two-hundred-forty-year-old castle in rural Germany owned by a Graf. She was born in the Philippines, raised in Australia, and now calls the United States home, and she can currently be found enjoying the shores of Miami with her husband, two daughters, and a miniature schnauzer.