Thanks for joining us as we celebrate the holidays with thirteen New Adult authors. Check out every stop leading up to December 24 to get excerpts, exclusive content, and hopefully a cutie under the mistletoe! Be sure to enter the Rafflecopter to win a grand prize pack of an ebook from each participating author!

Today I’m thrilled to be featuring Megan Erickson! I love this lady. Her books are wonderful and she is such a great person. She’s got a whole bunch of awesome coming our way in 2015 and I, for one, can’t wait to meet her next characters!

Megan Erickson worked as a journalist covering real-life dramas before she decided she liked writing her own endings better and switched to fiction.

She lives in Pennsylvania with her husband, two kids and two cats. When she’s not tapping away on her laptop, she’s probably listening to the characters in her head who won’t stop talking. 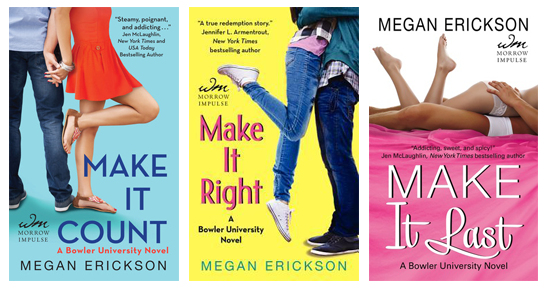 After graduating from Bowler University, the last place Cam Ruiz ever expected to find himself is his hometown. A bad job as a bouncer and worry over his mom’s health make living in Paradise anything but. There’s only one thing that can make his return any harder—running into the only girl he’s ever loved.

Tate Ellison made a mistake when she was eighteen, one that cost her the best thing she’s ever had. She always hoped the pain of losing Cam would fade over time. Too bad it’s only grown. She took comfort in the fact that she’d never have to face him again, so his presence in Paradise throws her for a loop.

The pull between them is instant, and when the truth of what happened years ago tumbles out, they share a mind-blowing kiss … which leads to more. But the past has a way of repeating itself. When all the cards are on the table, Cam and Tate must decide what they are willing to do to make it last.

Below is a brand new scene featuring characters from Megan Erickson’s Bowler University series. This takes place shortly after the end of Make it Right. Be sure to check out the final book in the series – Make it Last – releasing on January 6, 2015!

Max Payton spat out his half-chewed bite of pecan pie onto his plate. “Why the fuck does that taste like fire?”

Lea Travers dipped her finger into the gelatinous middle of Max’s slice of pie and stuck the tip of her finger in her mouth. Max was not wrong. She could feel the searing warmth down her throat and into her stomach. Her eyes watered and she coughed.

Max leaned into her shoulder. “You all right, doll?”

He reached for her glass on the coffee table in front of the couch they sat on in the Payton living room. He handed it to her and then turned to his brothers. Brent stood beside the recliner where their father was drinking a beer, and Cal leaned against the fireplace.

“I made it delicious.”

“You made it burn the lining of my esophagus,” Max shot back.

“How much bourbon did you put in it?” Cal asked.

Lea assumed if she checked the recycling, there’d be an empty bottle. That pie was drunk.

And seeing as Christmas Eve in the Payton household wasn’t going too hot, a hangover tomorrow was the last thing they all needed. Lea could tell her boyfriend, Max, and his brothers and Dad were trying, but they didn’t quite seem to have the holiday cheer. She wondered how the hell they got through previous holidays. Or if what she was witnessing right now was as merry as they got.

Which was sad. They were good guys. They just lacked a little finesse. A feminine touch. Their mom had left when Max was a kid.

Cal brooded by the fireplace, Jack drank in silence, and Max picked at his pie with a disgusted look on his face. Lea began to think that her plans for this evening might have been a bad idea.

Her plans that would be here in approximately five minutes.

She began to sweat and fanned her thin sweater off of her chest. Max frowned at her. “You okay?”

She wiped her forehead, like she was sweating. “Yeah, it’s just hot in here, you know? Maybe we can all go out in the backyard?”

Brent looked up from devouring his alcoholic pie. “Outside? Lea, it’s thirty degrees and dark.”

Why couldn’t they all just go with it? She had about – she glanced at the clock on the wall – T minus two minutes to get them out of the house before they heard the doorbell.

“It’s a family tradition of mine to look for shooting stars on Christmas Eve.” She was pretty proud of herself for that lie. It was a damn good one, and she’d made it up on the spot.

Max just stared at her. “What are you talking about?”

She tugged on his sleeve and stood up, bustling around to get their coats together. “Christmas Eve. Stars. Wishes. You know.” She clapped her hands together. “Round up, boys!”

Jack didn’t lower the footrest recliner. Cal was looking at her like she was crazy. Brent was picking a piece of pie off of his shirt…

And then the doorbell rang.

Cal’s head went up and he frowned. “Who the hell is ringing the doorbell on Christmas Eve?”

Lea laughed nervously. “I’m sure it’s just a solicitor or something. Okay, so backyard?”

But Cal ignored her and strode toward the front door. Max followed him and when they swung the door open, she squeezed her eyes shut. And waited.

There was a pause.

And when she cracked an eye open, she saw Cal scowling at the group of carolers Lea had asked to come from the local church. They were staring back at Cal like he was an axe murderer, and Max slowly turned his head to pin Lea with his gaze.

She waggled her fingers in weak wave.

Max sighed and turned back around.

There were five carolers, and the older woman in front was wearing a huge red coat over an ugly Christmas sweater and a massive fur hat. She seemed to gather herself together, and Lea had to hand it to her, because that was a bright smile in response to Cal’s frown.

“Merry Christmas, I’m Theresa and we’re from First Presbyterian over on Oakmont,” the woman said. “Would you like to hear some carols?”

Lea stepped up before Cal could answer. “Yes, please. Yes, yes we would.”

She felt a presence at her back and looked over her shoulder to see Brent, a grin on his face, his eyes on the cute young female caroler in the back. Who was blushing.

They began to sing a somewhat tentative version of “Jingle Bells.” Even so, Lea had to admit they sounded absolutely lovely, with a young guy in the back accompanying with a set of bells.

When that was over, Cal looked like he was going to close the door. But Lea could see Max beginning to smile, Brent bobbing his head, and Jack had even risen from his statue-like state on his recliner to listen to the carolers.

Theresa nodded and turned to her group. Lea swore she saw a twinkle in Theresa’s eye as she communicated silently with her group.

Then Theresa turned around, and the carolers launched into a rousing rendition of “Rockin’ Around the Christmas Tree.”

And it was lovely. And fun. Brent began clapping and even placed his fingers in his mouth and whistled. Max grabbed Lea’s hand and swayed to beat. Even Cal was smiling, leaning back against the open door, his lips moving as he sang silently along with the carolers. Lea swore she caught Jack tapping his toe.

Lea threw back her head and laughed as Max picked her up and twirled her. He leaned his forehead against hers. “You already made me the happiest guy in the world, and now you’re trying to work your magic on my family?”

“I have no idea what you mean,” she said with fake innocence as she gripped his dark hair tightly.

He lowered her to the ground. “Yeah ya do. And we all appreciate it.”

She ran her fingers along the stubble on his jaw. “Merry Christmas, Max.”

He leaned in and pressed a tender kiss to her lips. “Merry Christmas, doll.”