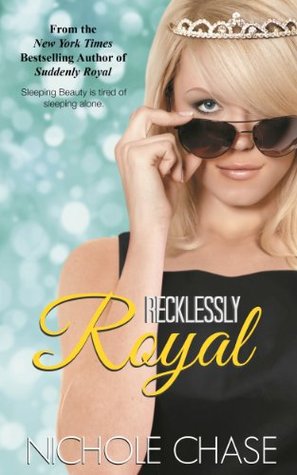 Catherine has spent her life being the perfect princess. She’s kept her hands clean, her head down, and most importantly—men at arm’s length. After all, most men are after only one thing, and for Cathy there’s a lot more at stake than her bed; she has to worry about the fate of an entire nation. But at the rate she’s going, Cathy is afraid she’ll give the Virgin Queen a run for her money. She is tired of waiting for someone good enough to come along. She has a plan, and it all hinges on seducing the one man who seems utterly unimpressed by all things royal. The one man she is tempted by more than any other . . .

When David arrives at the royal wedding of his friend, the newly ordained Duchess Samantha Rousseau, he expected to feel uncomfortable and out of his element, but he wasn’t prepared to be targeted by Prince Alex’s gorgeous younger sister. With Cathy’s giant blue eyes, killer figure, and sense of humor, it won’t take long before he gives in. But when he finds out just how innocent the crown princess really is, will he play the part of knight in shining armor or the dashing rogue?

Recklessly Royal was a great follow-up to Suddenly Royal and a nice continuation of the Suddenly series. The vibe in this story is a bit different than in the first, but I enjoyed it almost as much. Sam and Prince Yummy are a hard act to follow, but Cathy and David did a pretty good job.

I really liked both Cathy and David, but I didn’t connect with them quite like I did Sam and Alex. I did love the role reversal of royal woman/regular guy though. I also loved how Cathy put it all on the line to chase him. It was out of character, but somehow it seemed right. They shared some great scenes as they got to know each other, always conscious of the paparazzi surrounding them. The romance and heat between them came from a nice, slow burn and the wait was definitely worth it. While Recklessly Royal might not have been *quite* as sweet and romantic to me as Suddenly Royal was, it still had plenty of swoony and sexy times. It was quite an enjoyable read.

I listened to Recklessly Royal in audiobook format, just as I did Suddenly Royal. The narrator was the same, but I feel like she struggled a little with the Cathy’s accent in this book. It didn’t really take away from the story, but I had to adjust a bit before I became comfortable with it. Still another solid audiobook performance by Caitlin Davies.

I’m sad that there’s only one more book left in the Suddenly series. In the short time since I started listening to it, I’ve become a big fan. Nichole Chase is definitely on my radar now (better late than never, right?) and I’m looking forward to see what she releases next! I know her first Accidental Assassin book comes out soon. It’s high on my TBR.

Nichole Chase is a daydreamer. No, really, just ask any of the math teachers that had the misfortune of seeing her name appear on their class schedule. For years she has had story lines and characters begging for attention, but she resolutely pushed them aside to focus on more normal (read, boring) jobs. Well, no longer! She is currently heeding the voices in her head and frantically writing their stories. Nichole resides in South Georgia with her husband, energetic daughter, super hero dog, Sulcata tortoise, and two cats. When not devouring novels by the dozens, you may find her writing, painting, crafting, or chasing her daughter around the house while making monster noises.