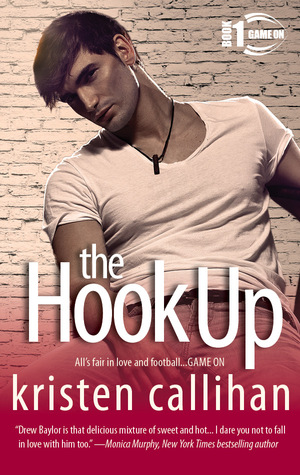 The Hook Up by Kristen Callihan
Series: Game On #1
Genres: Contemporary, New Adult, Romance
Publication date: September 8, 2014
Format: eARC, 352 pages
How I got it: From the author
Add it: Goodreads
Buy it: Amazon | Barnes & Noble
My rating:

The rules: no kissing on the mouth, no staying the night, no telling anyone, and above all… No falling in love

Anna Jones just wants to finish college and figure out her life. Falling for star quarterback Drew Baylor is certainly not on her to do list. Confident and charming, he lives in the limelight and is way too gorgeous for his own good. If only she could ignore his heated stares and stop thinking about doing hot and dirty things with him. Easy, right?

Too bad he’s committed to making her break every rule…

Football has been good to Drew. It’s given him recognition, two National Championships, and the Heisman. But what he really craves is sexy yet prickly Anna Jones. Her cutting humor and blatant disregard for his fame turns him on like nothing else. But there’s one problem: she's shut him down. Completely.

That is until a chance encounter leads to the hottest sex of their lives, along with the possibility of something great. Unfortunately, Anna wants it to remain a hook up. Now it’s up to Drew to tempt her with more: more sex, more satisfaction, more time with him. Until she’s truly hooked. It's a good thing Drew knows all about winning.

All’s fair in love and football…Game on.

I’m a sucker for sports romance, especially when the sport in question is my favorite – football. When I received this book for review consideration, I’ll admit that while I loved the sound of the book, the cover didn’t really draw me in. I know, I know. You should never judge a book by its cover. The Hook Up is a perfect example of why you shouldn’t.

The casual hook up that turns into more might not be a new storyline, but this one stood out from the pack for me. It was real and emotional and incredibly believable. I loved that it was Drew who wanted more and Anna who wanted to keep things casual. Call me old fashioned, but I still love it when the guy does the chasing. Especially when they chase like Drew does – with all kinds of sexy and swoony swagger.

The best part of this book, for me, was the relatability of the characters. Anna’s insecurity might have turned some people off, but I got her. Sure, I wanted to shake her at times because Drew was so… Drew, but I knew where she was coming from. Drew was so hot and sweet and perfect book boyfriend material. I loved how he helped Anna see the real her. The chemistry between them was written perfectly. I felt it all. And the sexy scenes? Smoking hot. I was completely sucked into everything about this book. I couldn’t get enough of these characters or their story. There was drama and emotions, but none of it felt too over-the-top to me.

I’m definitely excited to continue on with this series. This was my first Kristen Callihan book, but it won’t be my last.

Tags: 4 Star Review, Game On, In Review, Kristen Callihan, The Hook Up