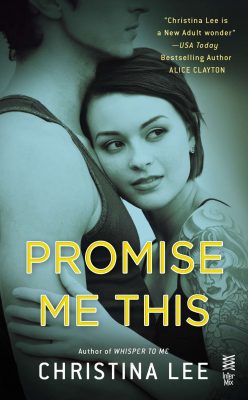 Promise Me This by Christina Lee
Series: Between Breaths #4
Genres: Contemporary, New Adult, Romance
Publication date: October 7, 2014
Publisher: Penguin/InterMix
Format: eARC, 246 pages pages
How I got it: From the publisher
Add it: Goodreads
Buy it: Amazon | Barnes & Noble
My rating:

Nate has developed quite a playboy reputation around campus. It's not that he doesn't respect or trust women; he doesn't trust himself. The men in Nate’s family are prone to abusive behavior—a dirty secret that Nate’s been running from his entire life—so Nate doesn't do relationships. But he can’t help himself around one girl…

Jessie is strong, independent, and works at a tattoo parlor. Nate can’t resist getting close to her, even if it’s strictly a friendship. But it doesn't take long for Nate to admit that what he wants with Jessie is more than just friendly.

With Jessie, he can be himself and explore what he’s always felt was a terrifying darkness inside him. Even when Nate begins to crave her in a way that both shocks and horrifies him, Jessie still wants to know every part of him. Testing their boundaries together will take a trust that could render them inseparable… or tear them apart.

I’m such a huge fan of Christina Lee’s Between Breaths series, I hate that I read this book months ago and am just now getting around to writing a review. Major fail on my part, but it in no way indicates how I felt about the book. I really enjoyed this one.

Promise Me This is a friends first story and if you read my reviews with any amount of regularity, you know this is one of my favorite tropes. It’s also a total opposites attract story, which makes it that much more appealing to me. Jessie and Nate couldn’t be more different on the surface. But underneath, where it really counts, they’re quite similar. They’ve been friends, but there’s an attraction between them that just keeps getting harder to ignore. They share great chemistry and some pretty real feelings. Their attraction runs deeper than purely physical. Jessie is the kind of girl that Nate knows will leave a mark. He can’t do casual with her and that’s all he’s good at. Or, you know, so he thinks.

I loved Nate. Like, big time. He was such a complex character. On the outside, he’s this good looking, frat boy type, but underneath he had a dirty streak. I do love a dirty-talkin’ bad boy who knows how to treat a woman in and out of the bedroom. Nate likes his sex a little rough. He likes to dominate. He’s conflicted about this, though, because his father was an abusive asshole and he fears his proclivities might lead him to turn out just like his dad. I argue the fact that he’s at all worried about this ensures he will *never* be like his father, but I digress. It was impossible not to love this guy.

Jessie was a great heroine. I identified with her artsy photographer vibe. She was strong, creative and sassy and I loved those things about her. It was easy to connect with her. She’s been attracted to her friend Nate for awhile, but didn’t think she was his type. She’s been looking for a little … more … from her relationships and didn’t think she’d find what she’s looking for in clean cut Nate, even if he was interested in her. Little did either of them know they were exactly what the other needed, and in more ways than simply in the bedroom.

Each of the books in the Between Breaths series have had their share of hot scenes. But, OMG, this book. Christina takes “hot” to a whole new level here. As Nate and Jessie explore their relationship and figure out what each is looking for, things are definitely steamy. I loved this couple. I loved the emotions they shared and how they helped each other to grow and embrace themselves and their desires. They had a powerful connection and I was hooked on them.

Christina became one of my auto-buy authors when I read All of You. I fell in love with everything about that book when I read it. I’ve loved each of the books in the Between Breaths series in their own way and for different reasons. Whether there’s more to come in this series or not, I can honestly say if Christina writes it, I will read it. I love her writing and her characters and the way I get hopelessly sucked into every single book she writes.

Tags: 5 Star Review, Between Breaths, Christina Lee, In Review, Promise Me This