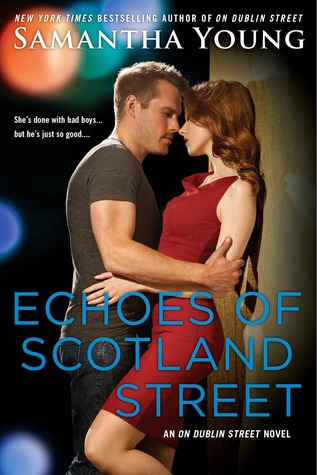 Shannon MacLeod has always gone for the wrong type of man. After she drifted from one toxic relationship to the next, her last boyfriend gave her a wake-up call in the worst possible way. With her world shattered, she’s sworn off men—especially those of the bad-boy variety.

Cole Walker is exactly the sort that Shannon wants to avoid—gorgeous, tattooed, charming, and cocky. But his rough exterior hides a good man who’s ready to find “the one.” He’s determined to pull Shannon from her self-imposed solitude to win her heart.

As Shannon opens up in the face of Cole’s steady devotion, the passion between them ignites to blazing levels. But when Shannon’s past comes back to haunt her, her fears may destroy the trust Cole has built between them—and tear them apart for good.…

I’ll admit, I put off reading this book for a little while because I was afraid I would be uncomfortable reading about Cole as the role of romantic lead. Since I devoured this series in a short period of time, I watched Cole grow up as a minor character in the other novels. I thought it might be hard to separate the man he is today from Jo’s baby brother, as I knew him. Yes, it was a little awkward at first, but I got over that pretty fast. I’ve loved all the men in the On Dublin Street series, but Cole is probably my favorite. *sigh* He’s just so swoony. (And I only feel slightly uncomfortable saying that now.)

I do think Samantha Young realized it might be difficult for some readers to embrace Cole as a sexy man after reading about him as a kid for so long. She wrote the book in a way that introduces him as he is now without getting too sexy, too quickly. We got a little glimpse of him as a grown man in Fall From India Place, but he’s center stage now. What a man he’s grown into! He’s a tattoo artist who is renowned for his work. He might be a big, beefy guy with tattoos, but he has a heart of gold underneath. He still carries with him the pain of his upbringing by a truly terrible mother. I just want to hug him and tell him it will be all right.

Remember when Cole met that pretty little redhead at his grandma’s house at the end of Before Jamaica Lane? She’s back! Can I tell you how much I LOVE THAT? I’m so glad they brought her back around. Shannon MacLeod has had a string failed relationships with bad-for-her men and she’s officially sworn off bad boys forever. When she gets a job at INKarnate, it’s a blessing and a curse. With it comes new friends in a new town, a place to live and … working side-by-side with Cole Walker. The guy she’s afraid she shouldn’t have walked away from years ago. Of course, all signs point to bad boy, so she tries her best to avoid the pull she still feels for him.

Avoiding Cole doesn’t last for long. I don’t know how she resisted him as long as she did, in all honesty. He had no problem letting her know he was interested in her. Afraid of getting hurt, she pushed him away over and over again. It took a fight, and a moment of clarity thanks to Hannah, to bring her around. I was so glad it did. I loved them together. They had tons of chemistry and they were pretty hot together. Cole is all man now… and he’s a little bit dirty. (I am NOT complaining. It was smoking hot.)

As unsure as I was about reading this book, I have to admit that I really, really enjoyed it. It was a great second chance story, of sorts, with characters I couldn’t help but love. Well, one I already loved but that I got to get to know in a different way. I really enjoy this series. I feared this would be the last book because I didn’t know which other secondary character could possibly get a book of their own. Thank goodness it is not the end! Shannon’s brother Logan was introduced during this book and will have his own story early next year. Hooray!