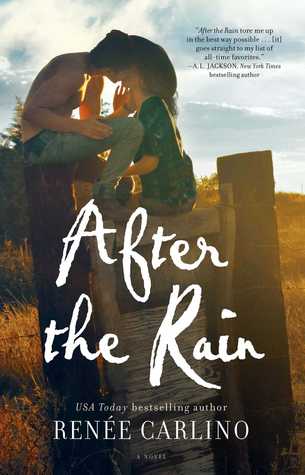 Under the bright arena lights of a rodeo show, young Avelina Belo falls for a handsome cowboy with a larger-than-life personality. After a whirlwind courtship, she happily moves away from her family in northern California and settles into married life with her cowboy on a seven-thousand-acre cattle ranch in Montana. One freak accident later, Avelina’s hopes for the future come to an end.

Nate Meyers graduated from UCLA medical school at the top of his class, ready to follow in the footsteps of his father, a superstar cardiothoracic surgeon. Six years later, Nate’s career is being ruined by a malpractice suit. Questioning himself for the first time, he retreats to a Montana cattle ranch to visit his uncle and gain perspective. There, he meets a beautiful young woman named Avelina who teaches him more than he ever knew about matters of the heart.

After the Rain is my first Renée Carlino book, but it certainly won’t be my last. I definitely picked a good one to start with. And hey, maybe all of her books are this great. I’ll know as soon as I have the chance to conquer her backlist.

To say I was hopelessly sucked into Ava’s story would be an understatement. My heart broke right along with hers after the accident that injured her husband and all the things that came as a result of it. She was far too young to deal with the things she faced. She wasn’t always the easiest person to like, but only because of how she beat herself up over a situation that was truly out of her control. Her guilt was eating away at her and stealing her life. It was quite sad, actually. It wasn’t until Nate arrived in Montana that she really began to come out of her shell and embrace all that’s beautiful about life again. Even though I admit it took some time for Nate to grow on me, I adored him by about halfway through the book. In the beginning he was arrogant and difficult to connect with. It didn’t take him that long on the ranch to start to change and become far more swoony in my eyes. Don’t get me wrong, he still had flaws, but I loved him if for no reason other than how he helped Ava move on and realize all was not lost.

After the Rain was a beautiful story of love, loss, second chances and, ultimately, hope. It was an emotional story that was full of feelings. Not all of them were good, but I was so invested in the story that I felt every single one of them. It was real, raw and gripping. In the end, I loved the message it portrayed about growing up and finding yourself. I also loved that I never really knew how it was all going to end. I don’t mind when books are predictable, romances – whether TV, movies or books – lend themselves to that. But, sometimes I love nothing more than just wondering how things are going to turn out – and realizing I would be happy regardless of how it all ended.

Renee’s first friends were the imaginary kind and even though her characters haven’t gone away, thankfully the delusions have. She admits she’s a wildly hopeless romantic and she blames 80’s movies staring Molly Ringwald for that. She lives in Southern California with her husband, two sons, and their sweet dog June. When she’s not at the beach with her boys or working on the next book, she likes to spend her time reading, going to concerts, and eating dark chocolate.

Tags: 4 Star Review, After the Rain, In Review, Renee Carlino