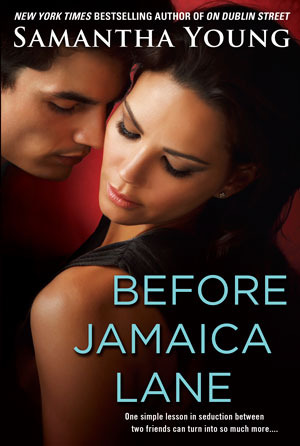 Despite her outgoing demeanor, Olivia is painfully insecure around the opposite sex—usually, she can’t get up the nerve to approach guys she’s interested in. But moving to Edinburgh has given her a new start, and, after she develops a crush on a sexy postgrad, she decides it’s time to push past her fears and go after what she wants.

Nate Sawyer is a gorgeous player who never commits, but to his close friends, he’s as loyal as they come. So when Olivia turns to him with her relationship woes, he offers to instruct her in the art of flirting and to help her become more sexually confident.

The friendly education in seduction soon grows into an intense and hot romance. But then Nate’s past and commitment issues rear their ugly heads, and Olivia is left broken-hearted. When Nate realizes he’s made the biggest mistake of his life, he will have to work harder than he ever has before to entice his best friend into falling back in love with him—or he may lose her forever…

The trouble with reviewing a book nearly a year after it was first released is that it becomes impossible to say anything about it that hasn’t been said a thousand times before. But, I just can’t NOT review it. I’m not one to play favorites (ok, that’s a lie) but if I had to pick a favorite book in Samantha Young’s On Dublin Street, it would be Before Jamaica Lane. I always have been a sucker for the “friends first” romance trope. There’s just something about it that rings true with me. It’s not because I’ve ever fallen in love with one of my male friends, but it just feels so real. Before Jamaica Lane takes it one step further by adding another favorite trope – the “sexual tutor” aspect – which is part of what made me fall in love with this book so hard.

As much as I love the tropes, I love the characters in this novel more. Olivia was a great heroine and I connected with her nearly immediately. I saw a lot of myself in her. Nate was complicated, but impossible not to fall for. Who doesn’t want to be the one to change the commitment-phobe, even if you run the risk of getting hurt in the process? Yes there were times I wanted to smack Nate silly, but underneath it all, I always adored him no matter how angry he might have made me in that moment.

Not only was Before Jamaica Lane sexy as sin, it had definite sweet and swoony moments and TONS of feels. While I found myself a little emotional during On Dublin Street and Down London Road, the characters and happenings in Before Jamaica Lane really got to me. The idea of them finding something real with each other, only to lose it when Nate got spooked, just about broke my heart. It would be an understatement to say I was emotionally invested in these characters. I cheered them on from the start. (So much so that I totally dismissed the sexy grad student, whose name I can’t bring myself to even remember, on first site.) I had VERY strong feelings about what should happen with Olivia and Nate. I would accept no less.

So, yes. I adored this book. Everything about it. I listened to the audiobook version of it at every chance I had. In the car, in the gym, while at work… I couldn’t stop until I got to the end. Where I’ve struggled with at least one narrator in the earlier books in this series – a bad Scottish accent is BAD – this narrator worked for me right from the start. The voices and pacing were perfect. Bottom line, no matter how you choose to read this book, if you’re a new adult fan, you won’t be disappointed. It’s been a couple months since I read it and now that I’m writing the review, I want nothing more than to go back and reread it… Something I will do for years to come. That’s how much I enjoyed this book.