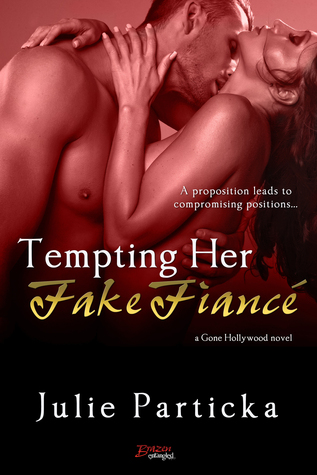 Journalist Stasia Grant needs a hero. Specifically one who will help her humiliate her ex-husband after he publicly left her for another woman. In Vegas for the biggest interview of her career, Stasia is grappling with a broken heart, her cheating ex (and the other woman), and a serious need for revenge. Her salvation comes from the most unlikely place charming and sexy-as-all-get-out action star Evan Stone.

After spending his life playing a superhero, Evan has a plan for delicious satisfaction: a fake, week-long engagement. He'll not only show Stasia's ex what he's missing but gain some sympathetic publicity to turn around his image as a player. It's win-win for them both. But neither expected the sizzling chemistry that erupts whenever they're together. Stepping out for the paparazzi, Stasia and Evan are about to pull off the performance of a lifetime...but will they fall for their own con?

Tempting Her Fake Fiancé was a fun and sexy Brazen title. I’ve read one of Julie’s new adult books in the past, so I was excited to learn she was making the jump to adult romance in general, and the Brazen line in particular. I’m a total sucker for a the “regular girl/famous guy” storyline and while this was a good story, it was just missing a little bit of the extra zest I’ve come to love about the Brazen imprint.

Stasia was running from a broken heart and looking for some payback. Evan needs to reform his bad-boy, player image. They have great chemistry during a planned interview, so naturally they decide to team up to fulfill both of their goals – and a few sexual needs along the way. I liked each of these characters. I sympathized with Stasia. She hadn’t had an easy time of it as of late and she really needed someone to treat her the way she deserved. Fake engagement or not, Evan did this for her. He helped her become more confident and see herself more clearly. In true romance style, they fake it so well, even they begin to believe it. It was sweet and sexy.

Tempting Her Fake Fiancé was a quick and easy read. I might not have completely connected with the characters, but I still enjoyed their story. This is the first novel in a new Brazen series, Gone Hollywood. I’m definitely going to keep an eye out for the following novels. 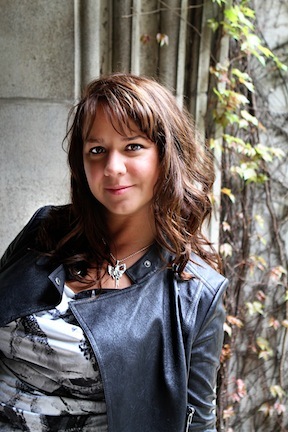 Julie Particka was told to get serious about her future in Junior High. Several years after getting a bachelor’s degree in chemistry, she realized being serious was over-rated and went back to her first love–writing. Now rather than spending her days in the drudgery of the lab or teaching science to high school students, she disappears into worlds of her own creation where monsters sometimes roam, but true love still conquers all.

She can most often be located in the Detroit area with her favorite minions (the ones who know her as Mom) where she is currently hatching a plot for world domination. It involves cookies for everyone, so she’s pretty sure there’s no way it can fail…except the minions keep eating the cookies.